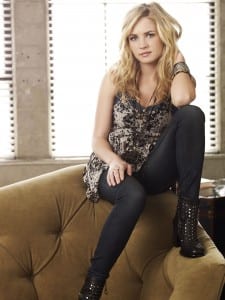 In an article at Entertainment Weekly, it is reported Britt Robertson (“Life Unexpected”) is the first actor cast in the much anticipated pilot for TheCW series “Secret Circle” based on books by L.J. Smith.

The Secret Circle television series is based on the books

The “Secret Circle” will be a bittersweet transition for the starlet who struck a chord with viewers as Lux Cassidy in “Life Unexpected,” a series which unfortunately appears unlikely to be picked up for another season on TheCW. However for some fans of L.J.Smith and “Life Unexpected,” the news couldn’t be better. Just don’t expect “Secret Circle” to have the same menagerie of witches, vampires, and werewolves like in “The Vampire Diaries.” Instead, viewers will find themselves in New Salem, a small town where witchcraft is as real as the secrets it keeps hidden.

The only question that remains is the role Robertson will play since there has been no specification. If we were to go by the books and looks alone there is potential in Cassie Blake, the central character who has light brown hair and blue eyes. She is the smart and down to earth girl who happens to be new in town. While another significant character, most likely a starring role as well, Diana Meade has blond hair and green eyes. She is a popular girl who despite her angelic features and social status is far from the mean girl one might expect to find in high school.

What role would you like to see Britt Robertson play on “Secret Circle?” Share your comments below!

UPDATE: Zap2It reporter Carina MacKenzie (@cadlymack) revealed information via Twitter that Britt Robertson will allegedly play Cassie Blake – unless there are any last minute changes. In it she says:

“Britt Robertson has confirmed that she will play Cassie in The Secret Circle. So psyched for her.”