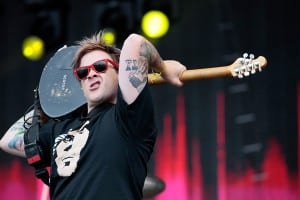 The name of their newly-formed band rings true in more ways than one; Reddick and Hamilton are taking a break from their respective (musically disparate) bands for this new collaboration, leaving fans shocked and curious.

The unusualness of the pairing isn’t lost on Reddick and Hamilton. Bowling for Soup has had relative commercial success with hits like “1985” and “Ohio (Come Back to Texas).” Smile Smile is a less-notorious folk band comprised of Hamilton and Jencey Hirunrusme.

So naturally, fans of the bands scratched their heads when the two lead singers joined forces for People on Vacation. But their first show in Dallas last month took steps toward explaining the madness.

“People came with crossed arms at the beginning…” said Hamilton. “People seemed very confused by it. And it was nice to play some shows and kind of watch the audience have a light bulb moment.”

Reddick and Hamilton met a few years back when Reddick dropped by Smile Smile’s show at Austin’s South by Southwest. He was impressed by what he heard, but Hamilton didn’t feel the same way at first.

“I leaned over to Jensi,” Hamilton said, “and said ‘What the hell is the singer from Bowling For Soup doing at our show?'”

But a few months later, Smile Smile would be touring with Bowling for Soup, and as they say, the rest is history. Hamilton and Reddick developed an appreciation for each other as musicians, and through their collaboration, found a way for each of them to explore new musical territory. Reddick wanted to perform more serious material, and Hamilton wanted a chance to “not be so sad and awkward.”

The duo went to the recording studio, and walked out four days later having written and recorded 15 songs. “It was the accidental songwriting chemistry,” said Hamilton. “Who knew?”

Neither musician is leaving his original band. They’re not sure of People on Vacation’s trajectory, but claim that for now, they’re just booking shows and having a good time.

“I’m typically not one to buy into when the stars align…” said Hamilton. “But I feel like there’s something special with this thing the way it’s all falling into place.”

People on Vacation is currently on tour. For tour dates and more information, visit Wearepeopleonvacation.com.