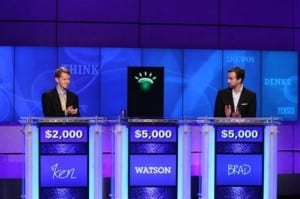 As the world watched IBM supercomputer Watson wipe the floor with veteran Jeopardy champions Ken Jennings and Brad Rutter, much was made of the impact this victory could have on society. With robots already replacing humans in assembly lines and factories internationally, this demonstration of a computer’s ability to learn over time and understand the nuances of language – including puns and jokes — raises the spectre of intelligent machines taking over even more advanced jobs.

According to Martin Ford, author of “The Lights in the Tunnel: Automation, Accelerating Technology and the Economy of the Future,” it is already happening.

Ford, a graduate of the University of Michigan, boasts more than 25 years in the field of technology and has seen the ever-growing influence of automation firsthand. Since starting his own business over 15 years ago, Ford has watched his company’s technology rapidly progress. “Even as a small business, I see the impact,” Ford said in a phone interview Wednesday. “Everything used to be done by telephone, the software sent by mail. Now we have the Internet.”

Beyond its social significance, the increase in automation at his own software company inspired Ford to explore the ramifications of burgeoning technology on the economy. “At the rate at which technology is advancing, repetitive, routine jobs are likely to get automated in the next 10 to 20 years,” Ford explained, and he doesn’t believe it will stop there. As an intelligent computer like Watson demonstrates, increasingly sophisticated machinery could soon replace humans in more and more complex, analytical fields.

“There is a limit to (human) capability. If you’re working at McDonalds, you’re probably not going to get a PhD,” Ford said, adding that as robotic intelligence is developed, it will begin to push against that capability. When machines grow beyond simple physical tasks to the skilled, mental work of middle- and high-level jobs, the dwindling opportunities for workers will continue to drag the economy deeper into recession. As Ford explains it, in a mass-market economy like the United States, the problem is simple: “There will be fewer and fewer people with the discretionary income to participate in the economy. You can’t drive the economy like that.”

Ford’s solution is unorthodox at best – he promotes a model of progressive taxation and the payment of a basic income to all citizens, whether they work or not – and a far cry from our modern capitalism. “It’s a radical idea in terms of politics,” he acknowledges, noting that the current conservative policies that seek to de-fund social welfare programs are “accelerating the process.” With automation gaining ground all fields of employment, Ford feels that economic change is all but inevitable and the government must prepare for the eventuality that technology may one day have the ability to put any American worker out of his job.

There is perhaps no greater evidence of this than Watson’s staggering win, which demonstrated computing ability far beyond even the sizable skill of Deep Blue, the IBM computer that defeated famed chess grandmaster Garry Kasparov in 1997. “The technology is pretty amazing,” Ford stated. “I’ve never seen a machine, a computer, handle language in this way.” But it is more, he insists, than mere understanding. Ford emphasized Watson’s machine learning as the true secret to its success: “A machine that can get better and better – it’s proven that its operating at a championship level. There are big implications for the future in that.”

Indeed, as companies like Google continue to develop supercomputers of their own, the expansion of automation seems increasingly likely. “We’re going to see it in the coming year,” Ford said, predicting that these types of technology will begin to encroach on higher skill jobs. “It’s going to be a huge issue for us as a society,” he stated.

As Watson and his contemporaries are designed to perform ever more complicated tasks, the impact on the economy looks increasingly bleak. With robots performing more jobs once reserved exclusively for college graduates, Ford predicts that the displacement of workers will only continue to grow: “It is unclear where the jobs of the future are going to come from.”