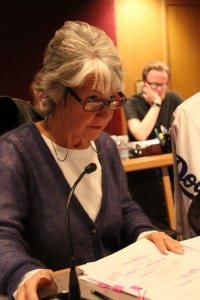 To vocally craft the characters within the DC Universe Animated Original Movies, DC Entertainment, Warner Premiere, Warner Home Video and Warner Bros. Animation say they went to the best in the business – on both sides of the microphone.

While winners of Oscars, Emmys and Tonys alike provide the voices behind some of the world’s best known comic book characters, it is the super hero of voice directors that guides these unique talents – Andrea Romano.

Perhaps the top animation voiceover director in the business today, Romano has been instrumental in orchestrating the vocal tones behind the first 10 DCU animated films, including the anticipated February 22 release of All-Star Superman.

The eight-time Emmy Award winner (with 30+ nominations) has a voiceover casting/direction resume that spans more than a quarter century, covering the genre gamut from action (Batman: The Animated Series) and humor (Animaniacs) to contemporary (The Boondocks) and timeless (Smurfs).

Romano paused between her many current projects – including a few upcoming DC Universe Animated Original Movies – to discuss the cast and recording of All-Star Superman.

QUESTION: Are there certain writers’ scripts you find easier to direct or get an instant feel?

ANDREA ROMANO: There are several writers I’ve worked with over the years whose words I can recognize without even seeing a title page, like Stan Berkowitz, Alan Burnett, Bob Goodman and especially Dwayne McDuffie. And because I’ve worked with them for so long over so many different projects, and once they know I’m on a project, it’s almost as though they write for me – because they know exactly what information I need to know to give to the actors. So I love working with all those guys. Dwayne works so hard on being true to the source material, and yet translating it into something that can be acted. He’s really good at making that transition of honoring the material, but bringing the words off the page to make it actable and dramatically interesting.

QUESTION: You’ve directed your share of voices for Superman. How did James Denton rank in his first foray in animation?

ANDREA ROMANO: Jamie was a voiceover virgin, or he hadn’t done much, but he was outstanding to work with. Once an actor trusts that I will not let their voice go out sounding bad, and that their performance will be nothing less than the best, it becomes a very pleasant experience for all involved. Jamie was like that. He reminded me of Jensen Ackles – both are good actors, I’d seen their on-camera work, but because this form is different than what they’re used to working with, there is some insecurity with the territory. But once they don’t feel threatened, they relax into the role. Jamie was a really interesting choice – it can be difficult to cast some of these Superman films – and he brought some unique interpretations and sensitivities to the role. And that’s interesting for a director – to hear somebody else’s thoughts on what a man like Superman would sound like.

QUESTION: What are you seeking in a Superman voice that differentiates from all other voices?

ANDREA ROMANO: Superman is such an interesting character because, while he isn’t human, he has so many human qualities. He’s interesting because without the effects of certain kryptonites, his instincts are always going to be to do the right thing. But you don’t want that to come off as being a Boy Scout or one note. And so you need kind of the white knight, but to still keep him interesting. It’s like when we girls first start dating, it’s never the clean-cut nice guy that attracts us – it’s always the bad boy with the extra dimensions. That’s why I like Batman so much. But when we can give Superman some layers, that makes him interesting. And every actor I’ve used for Superman has brought some amazing layers.

QUESTION: How did you choose Christina Hendricks to play Lois Lane?

ANDREA ROMANO: I am such an admirer of her work, and I love what she does on Mad Men. It was cute because she was quite nervous coming in with no prior voiceover experience, but her acting instincts are so good, she has the ability to adjust to acting to a microphone as opposed to camera very quickly. I always give people positive feedback, but I was telling her “terrific job” and you’ll see the evidence when you see the piece. This is a very unusual, different story between Lois and Superman, and she captured everything we were looking for and then some. She was so enthusiastic about the role that she found a way to squeeze the recording into her schedule – right after getting married – and she gave us a terrific Lois Lane. I would use her again in a minute.

QUESTION: I’m guessing you’ve been angling to get Anthony LaPaglia behind the microphone for a while?

ANDREA ROMANO: The actors I tend to bring in are people I’ve admired from afar and have been looking for a specific character for them – as with Anthony LaPaglia for Lex Luthor. He is such a versatile actor, and his dialect work is so good. Moreover, he was so directable. If something confused him, he asked just the right questions – he wouldn’t blindly do it 10 times to make it be right. He’d ask a very specific question, and that makes it easy to direct, because you can answer those direct questions.

QUESTION: Do you hold actors in any higher esteem when they are able to perfectly portray an accent foreign to their own?

ANDREA ROMANO: I admire anyone who is a dialectician in addition to acting. Doing dialects is very technical, while the acting is more organic, so when they can marry those two things convincingly, it’s golden. What I find more often is that British actors can do a spot-on American accent – I think that’s often because they come to America to find work and there’s lots of casting to be done for American characters, so they’re just smart to do it. And it’s not that easy to do an American accent because there are so many regional versions – the deep south, the northeastern variations, even Southern California. They each have their own twists. Greg Ellis can do just about any accent you throw at him. Robin Atkin Downes is just amazing. Jason Isaacs does some stunning accent work – he perfected a Rhode Island accent for Brotherhood. Miriam Margolyes is another brilliant dialectician – I adore her accents.

QUESTION: At one point in the LaPaglia session, he wasn’t understanding your direction no matter how many different ways you worded it – and Brcue Timm was able to communicate your direction with a simple drawing of Lex’s face. Has Bruce done that previously/often over your 20-plus years working together?

ANDREA ROMANO: When Bruce did that for Anthony, I thought that was one of those great moments where a picture is actually worth ten thousand words. One of the things Bruce has done a million times before is, when someone comes in to play a role, he’ll draw the character right there on the spot. That almost always helps an actor establish a voice.

QUESTION: What’s the most unconventional casting of a villain you’ve ever done?

ANDREA ROMANO: Bill Macy as a villain in Batman Beyond. I thought I’d do it just to let him be the bad guy, because at the time he was getting all the hapless, milquetoast, endearing good guy roles. So I thought it would be fun to switch it around and, of course, he was brilliant.

QUESTION: This film has a lot of smaller that make an impact, and you spared no expense in bringing in some lofty talent like Matthew Gray Gubler as Jimmy Olsen, Frances Conroy as Ma Kent, Ed Asner as Perry White and even cult favorite Alexis Denisof as Dr. Quintum. What was your thinking behind some of those casting choices?

ANDREA ROMANO: I think Matthew is such a talent. He just did an episode of Criminal Minds where his character was suffering a migraine throughout the entire episode, and he was so good that you actually felt his headache. What I love about Matthew’s voice is that it’s got a naturally youthful quality, and there’s something interesting he does naturally where he almost ends every sentence with a question mark. It’s a very specific speech pattern. His sentences tend to go up at the end. He’s a perfect Jimmy Olsen – sweet, endearing, slightly nerdy. If I had a role for him in every project, I would always hire him.

Frances Conroy – first, let me say that she is not related to Kevin Conroy, which is kind of funny because they know each other very well, and they even went to Juilliard together. I’ve admired her work on everything from Six Feet Under to Maid in Manhattan, and when I heard she was doing voiceovers, I was so jealous somebody else got her before I did. While there weren’t many lines for Ma Kent, it’s always a pivotal role – it’s the woman who helped shape Superman’s sense of right and wrong. And Frances just has that quality about her voice that is mothering and warm and thoughtful, and what she did with such few lines of dialogue was wonderful and exactly what I was hoping to get.

Alexis has such an interesting quality to his voice. I loved Dr. Quintum, he’s such an odd character, and the voice matches perfectly. I’m never 100 percent sure when doing the casting if I made the right decision. It’s not until it comes back in animation that we really know that it actually did work. Alexis as Dr. Quintum is definitely one of those circumstances that worked well.

QUESTION: Beyond the on-camera actors, you tend to appear to have the best times directing when you have a room full of full-time voiceover actors – like on this project with John DiMaggio, Kevin Michael Richardson, Robin Atkin Downes, Steve Blum, Fred Tatasciore, Michael Gough and so on. What’s that group session like?

ANDREA ROMANO: Often when I cast my ensemble players for some of the secondary characters, and that is to say secondary characters by the number of lines they must perform, I treat it almost like a casting party. I want to put together people who enjoy being in a room together, that are going to bring something to the party, and that they’re somebody with whom I want to spend a few hours locked in a room together. Okay, sometimes it should be a padded room. I find that I get a core group of actors and I almost want to carry them with me to every different project I’m working on – the end credits of my films and series probably back that up. When I get the chance, I also like to cast those guys in major featured roles, like John DiMaggio as the Joker in Batman: Under the Red Hood. The thing about these actors is that they’re so versatile that I could assign three roles to each before they walked into the room, and I could change it when we walked into the room and they’d have no problem playing the other characters instead. It’s always fun to work with that group, but sometimes it is like being a kindergarten teacher with an over-crowded class.