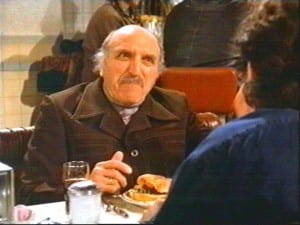 Veteran film and television actor Len Lesser died Wednesday morning at his home in Burbank, Calif., of complicated from pneumonia. He was 88.

Mr. Lesser, who reportedly died in his sleep, was best-known as Uncle Leo on the legendary television show “Seinfeld.”

“It was very peaceful,” his daughter, Michele Lesser, told CNN yesterday. “He was a great grandpa, and an amazing father. He had a heart of gold — and a sense of humor of platinum.”

Beyond “Seinfeld,” Mr. Lesser was a legendary small and big screen personality, making more than 500 film, television, and stage appearances.

Mr. Lesser appeared in “The Outlaw Josey Wales” and “Kelly’s Heroes” and played Garvin on “Everybody Loves Raymond.”

He was also an Army veteran, serving in World War II.

In addition to his daughter, Mr. Lesser leaves a son, David, and three grandchildren.