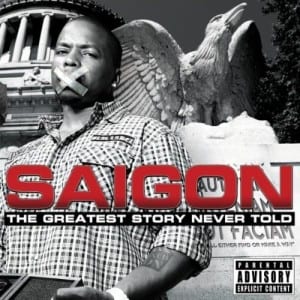 Brooklyn-based rapper Saigon released his highly anticipated debut album “The Greatest Story Never Told” February 15. The rapper was introduced to the mainstream when he guest starred in the hit HBO TV series “Entourage.”  After overcoming various incidents which caused the numerous delays of the album, the record was finally released from Fort Knocks Entertainment, a label newly launched by producer Just Blaze (Jay-Z, Eminem, T.I.).

Although we are not very familiar with Saigon’s voice yet, a great team of producers and guest performers have his back, and that’s one reason why the album is very good. In addition to Just Blaze, Kanye West also participated in the album as one of the producers, as well as Rich Nice (Ludacris, NAS) and MTV’s Sway Calloway.

This album can be considered as one huge ‘package’ because of several reasons. Each transition between tunes is entertaining and it doesn’t bore listeners when switching into a next track. So, it’s highly recommended to turn off repeat/shuffle mode because it’s much more enjoyable to listen to the record from the first track to the last one in order.

As the album title The Greatest Story Never Told indicates, it is all about Saigon’s life story from his unstable childhood to the six years he spent in jail. Not listening to the album in order might literally kill the whole point that listeners could fully get from the soulful storytelling album.

“Come On Baby,” based on a sample of “Southside Shuffle” of J. Geils Band, is actually the first single from the album released back in 2007. The tune features Jay-Z and Swizz Beatz and is a good representation of the New York hip hop scene.

Rock-influenced energetic track “Bring Me Down Pt.2″ has a tune that’s too deep to be categorized into a specific genre, and it focuses on how he’s been staying strong no matter what difficulties he went through. It’s pretty touching.

The title song “The Greatest Story Never Told” is  one of the highlights. The best way of describing it is probably something that will be stuck in your head for hours once you get to listen to it. The transition between this tune and the next track “Clap” is amazingly smooth as well.

Rhythmical slow tune “It’s Alright” is produced by Kanye West and based on a sample of “Superstar/Until You Come Back To Me” by Luther Vandross, the track is very simple and the sound is gorgeous.

How the record ends is also breathtaking. “Too Long” features Black Thought of The Roots. The track keeps the main core of hip hop, and at the same time, with lyrics like ‘I’ve been here too long,’ the song has some kind of relief feeling to ease a heavy burden of pain and oppression. It’s a great last song to perform at shows too. In the end, you feel glad that the greatest story was just told by Saigon.