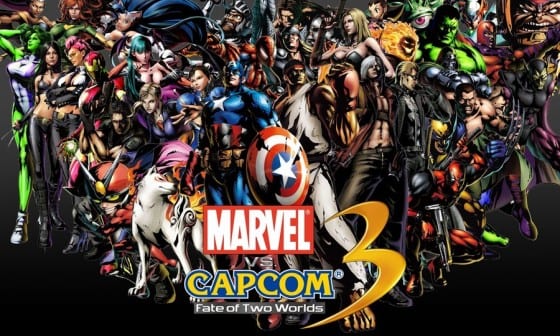 Some things just seem to be made for each other; peanut butter and jelly, popcorn and movies, Marvel and Capcom.

Yes, for the last 13 years (15 if you count the very first coin-up  Japanese release of X-men VS Street Fighter) the unlikely series pitting characters from Marvel’s comic book universe and Capcom’s lineup of games has kept fighting fans up at night and arcade stinks clanging. Now, the highly anticipated third game in the series is finally hitting retail, was it worth the wait?

Hell yes. It may be missing a few fighters compared to the last game, and the online is surprisingly lacking, but Marvel VS Capcom 3 is the ambitious and fun fighting experience that gamers have been waiting for. If you have even a passing interest in the worlds of Marvel, Capcom or fighting games in general, you can’t pass up Marvel VS Capcom 3.

Marvel baddie Dr. Doom has assembled his world’s most dangerous villains and formed an alliance with Resident Evil’s Albert Wesker in an effort to control both universes.  Sounds like a great plan right? Except for the fact that doing so has awakened an ancient evil that could potentially destroy each world. Of course, it’s up to both the Capcom and Marvel heroes to stop it from happening. Okay, so it’s not the most original story but it’s unlikely you’re going to pay much attention to it anyways. Of course, the core of the game is the fighting mechanic, and it’s sure to not disappoint.

The first thing you’re going to notice when popping in Marvel VS Capcom 3 is the eye-popping sensational visuals . Borrowing much from Capcom’s Street Fighter IV, the game features a dynamic cell shaded visual style that balances well with the 3D fighting on a 2D plane, and just wait until you see the vibrant and dynamic super moves. Much of the same love has been given to the game’s sound, all of the one liners and music from the past of both universes is well represented. 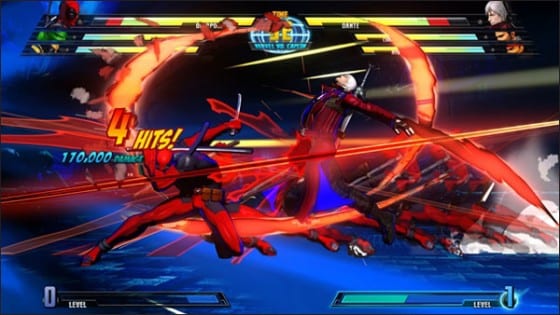 Let’s not waste any time and get to the elephant in the room right away, Marvel VS Capcom 3 only features a total of 36 characters, a far departure from 56 in the second game. It may seem like a big deal, but each of the characters in Marvel VS Capcom 3 is genuinely fun to play and unique. It’s also the most diverse of the rosters yet, with Capcom including less Street Fighters and more oddball characters like M.O.D.O.K., Deadpool (the cool comic book version, not the lame Ryan Reynolds movie one) and even Arthur from Ghosts and Goblins who fights in his trademark heart skivvies.  Of course, your favorites are still here, like Wolverine, Ryu, Captain America and the Hulk. With the promise of upcoming DLC, the strength of the roster will only get stronger.

As much as the Marvel VS Capcom series has been popular, it’s also been one of the most difficult series in recent memory.  That core experience is still here for veteran players, but Marvel VS Capcom 3 is unquestionably the most accessible of the series thanks to an intuitive training experience. You’ll start at the most basic step, having each of the attacks mapped to one button and working up to taking off the training wheels with the game’s more robust and difficult features. The game is enjoyable with a controller, but it’s downright heavenly with an arcade stick.

Much of the framework for Marvel VS Capcom 3 was borrowed from Street Fighter IV, or more specifically, Super Street Fighter IV, it’s just a wonder why they didn’t bring over the robust online engine from the game as well. As it stands, the game features only ranked and player matches, plus custom lobbies to recreate the arcade experience.

The Blast Factor: To put it plain and simple, Marvel VS Capcom 3 was more than worth the wait that the franchises dedicated fan base has suffered through since its announcement. Retaining much of the formula from the original and adding a slew of new characters and visuals – it’s the next logical step in the evolution of the franchise. Even more, Marvel VS Capcom 3 is simply the best we’ve seen of the series yet.