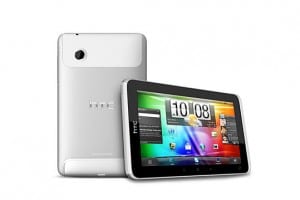 HTC Corp. debuted a tablet called the HTC Flyer on Tuesday at the Mobile World Congress show in Barcelona.

The tablet is designed to compete with Apple’s iPad and can be used with a finger or a battery-powered pen/stylus.

The Flyer will have a 7-inch screen, which makes it smaller than the iPad.

It goes on sale in the second quarter. No price was announced.