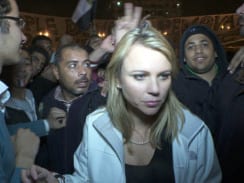 CBS News Correspondent Lara Logan in Tahrir Square moments before she was attacked on Feb. 11, 2011. (CBS)

A CBS correspondent was attacked and sexually assaulted on Friday in Tahrir Square in Cairo, after the resignation of Egyptian President Hosni Mubarak, the network said in a statement Tuesday.

Lara Logan, 39, was covering the events for “60 Minutes” when about 200 people surrounded Logan and her crew. Logan was separated from her group, surrounded, beaten, and sexually assaulted, CBS said.

According to CBS, a group of women and 20 Egyptian soldiers came to Logan’s rescue. She returned to her hotel and arrived back in the US on Saturday, where she was hospitalized.

CBS said that Logan and her family requested privacy.

Logan is the “60 Minutes” chief foreign affairs correspondent and has worked for the show since 2004.