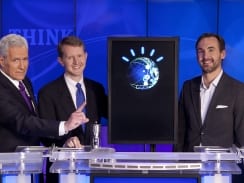 After one round, it appears that machine is at least equal to man.

Watson, IBM’s new supercomputer, is designed to think like a human and use logic to answer questions on the game show “Jeopardy!”

In the much anticipated match up, Jeopardy!’s best players ever, Brad Rutter and Ken Jennings, try to best the computer.

Watson struggled in some categories, specifically the “name that decade” category, where Watson was thinking of specific years often.

Waston also repeated one of Jennings’s incorrect answers, showing some faulty logic there.