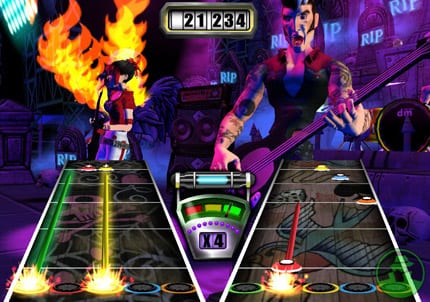 In an industry seemingly in love with zombies, it’s not hard to believe a game could rise from the dead. Hell, just look at Duke Nukem Forever. But could we be seeing a Guitar Hero resurrection down the road?

Speaking with CNBC about the decision to discontinue the Guitar Hero franchise, Activision CEO Bobby Kotick left the door open to the series returning in some way. “”We can never say never, but over the past two years we have seen rapid declines in the music genre, and unfortunately, based on current demand, we simply cannot continue to profitably make these games given the considerable licensing and manufacturing costs.”

Kotick also talked about the company’s decision to scrap a long running, but albeit thinning fan favorite. “We had three fantastic products in the marketplace in the [music] genre this year, our two games, DJ Hero 2 and Guitar Hero: Warriors of Rock, and then Rock Band did a terrific game, but it’s just not a category that’s getting consumers enthusiastic right now, and so I think you need to focus your resources on the things that really gets consumers excited.”

“”If something’s not working, we’ll take it off the table, maybe reinvent it in the future, but our focus is really on figuring out what are the things that are going to excite audiences the most.”