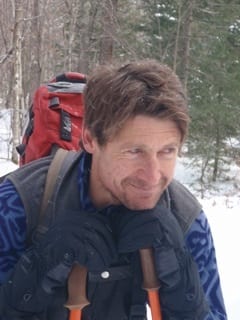 John Davis, 47, dropped his paddle in the water and, with one stroke, moved his kayak forward. At that moment, on Feb. 3, in Key Largo, Fla.’s John Pennekamp Coral Reef State Park, with a simple ripple of bright blue water, he said an abrupt goodbye to daily routine for 10 months.

During those months, Davis will be kayaking, hiking, cycling and skiing through the wilds of the eastern United States until he emerges in Quebec, well north of Montreal and directly above New Brunswick, Canada, at the Gaspe Peninsula. Obviously, this is not your typical getaway. He’s not going to be staying at Florida hotels, hotels in Quebec, or anywhere else on the way for that matter. The 4,500-mile expedition’s aim is to raise awareness of the need for a north to south eastern “wildway,” a connected habitat that would allow safe passage for native wildlife needing room to roam.

“I hope people will view this journey from afar and feel better connected with the lands and wildlife they love,” Davis said. “I hope they will feel inspired to help save and restore these places and species, and will learn ways they can do so.

“There are a few simple ways this can be done,” he continued. “One is to build overpasses so that animals can safely cross roadways. There are also far too many dams that serve no purpose in the community that can easily be taken down.”

The motivation behind the trip is manifold. On the surface, the journey through 13 states and provinces is simply a logical, albeit aggressive, step in a long career dedicated to conservation. John studied environmental ethics at St. Olaf College in Minnesota and has learned the intricacies of biology through reading textbooks and picking the brains of the vast number of scientists he calls friends. Professionally, Davis has held many titles, all dedicated to nature in some way. In the 1990s he co-edited “Wild Earth” magazine. Since then he has served as biodiversity and wilderness program officer for the Foundation for Deep Ecology and, until recently, wildlife conservation director for the Adirondack Council.

Yet the desire to act on the trip now, a journey that Davis has been concocting for years, stems from a need to ensure that it is a shared event between family members. Both of Davis’ parents are elderly, and his mother has terminal cancer. He feels a need to make sure that they can experience the trip vicariously. “Most, if not all, of my family have a strong inclination towards helping nature. It goes way back to my childhood and was fostered by my parents, who would take me for walks,” Davis said. “My mother is very ill. I wanted to do something to honor my parents and I hope that she can experience this and see me finish. It motivated me to get going.” 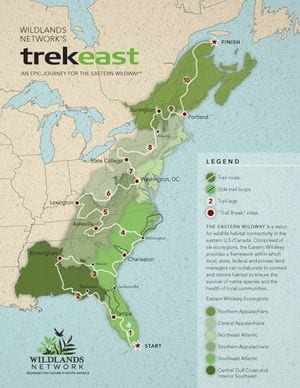 TrekEast will include “Trail Break” stops in cities along the meandering route north. During these breaks, Davis will be speaking with the media and making public presentations.

Acknowledging the dangers of such a trip, Davis points out that he will not be alone for much of the time. As he traverses the Adirondacks, local experts will guide him. However, the biggest threat on the trip may be ticks, as Davis was stricken with Lyme disease on a previous outing.

Davis feels that for nature preserves to be really effective in the long run, we need to create this broad wildlife corridor to ensure a natural food chain, with no overpopulation that could result in the spread of disease and that would allow wildlife to migrate at their own accord. According to Davis, this is feasible, but a lot of the general public has a complacent and/or cynical view of nature preservation; people think that rampant urbanization has rendered it impossible to incorporate the well being of animals into modern life. Davis hopes that this trip will change that common view. “A wild adventure and the exhilaration of motion can attract outsiders to the noble cause of protecting wildlife habitat,” he said.

This trip is at once an endpoint and a launching pad, proof to his parents that he has lived his life in accordance with the way he was raised and that their values will carry on. Despite the daunting task, he will be spending the better part of the next year following his heart into the wilderness. But on those inevitable long stretches of loneliness and fatigue, something much smaller will be motivating him and keeping him going. “I want to do right by my parents,” Davis said, “which is something I think a lot of people desire to do.”