If there’s one thing I’ve learned from watching “Gnomeo and Juliet”, it’s that lawn gnomes aren’t cute. Not even a little bit. They’re grotesque things, humanlike but with dead eyes that seem to see nothing. And, if you see them before going to bed, their blocky bodies and pointy hats will haunt your dreams.

At least that’s what happened to me after viewing a horrific 3-D version of “Gnomeo and Juliet” a reboot of the classic tragedy as a comedy starring garden gnomes. The fact that I even had to write that sentence in my lifetime illustrates the sad decline of Western art and culture, and makes me want to hit something very, very hard.

What I can’t seem to understand is how director Kelly Asbury managed to get a stellar cast for this insanity. James McAvoy and Emily Blunt voice the titular heroes; Michael Caine lends his voice to Juliet’s over-protective father, and Maggie Smith plays Gnomeo’s mother. I can see how they got Ozzie Osbourne to voice an absent-minded ceramic pony, but does Caine need money that badly? 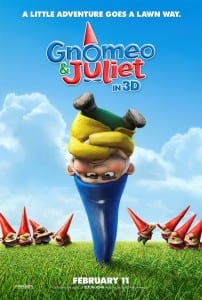 I will say there is something kind of sweet about how lovingly the animators rendered the lawn gnomes, right down to their scarred and chipped finish and the cement clink sound they make when they touch each other. Likewise, the initial concept of lawn ornaments emulating the suburban lawn feud of their neighboring owners could have worked in more capable hands. Sadly, the writing is a deeply weird mesh of vaguely dirty jokes, on-the-nose Shakespeare references, bad puns, cheese and slapstick. For every joke that hits, there are ten that fall flat (as was marked by the confused silence of the children in my audience) The disjointed quality probably stems from the fact that there are six writing credits attached to the movie (seven, if you count Shakespeare).

And then there are the parts of the movie that play like some sort of insane fever dream. Every so often, for no reason it segues from the primary plot to musical interludes marked with Elton John songs (John wrote the original music for the film). In one case, the music accompanies some sort of John Hughes-style montage of the star-crossed lovers getting ready for their first date. And, of course, because it’s in 3-D, this psychedelic freak-out looks like it’s coming right at you.

At that point, I wrote in my notebook “SEIZURE” in big block letters. It was underlined twice.

I gave “Gnomeo and Juliet” one star for one reason: Hulk Hogan. Hogan voices the funniest part of the movie: an advertisement for “the Terrafirminator”, an unnecessarily powerful lawn mower that leaves devastation in its wake. It’s a very funny riff on how, in the absence of real lawns and real land, we tend to our tiny developed patches of Astroturf with ridiculous amounts of gas-powered fury.

Hogan’s scene is worth that star, and my congratulations. But I can’t imagine it’s worth the $10 to watch giant bulbous lawn gnomes lunge at you through the magic of 3-dimensional movie-making.