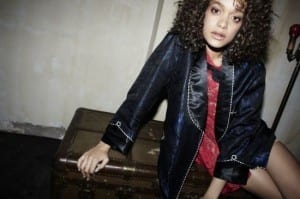 From the “Skins” inception in 2007, it has been consistently identified as a commentary on the social atmosphere created for the younger generation by its nation’s culture. In the original British series on E4, the angst and apathy and aggression bursting forth from the adolescent masses seemed to be channeled almost procedurally through the social infrastructure. Each episode, in its own way, would vilify the system that routinely ignores its progeny by demonstrating the lifestyle that the emotional turmoil caused will habitually produce.

In MTV’s duplication of the series, the fourth episode breaks fairly radically in script from the British version (much like Tea’s episode). Such variation allows for unique commentary on American culture instead of British.

The episode, “Cadie,” follows the pill-popping, perpetually skeletal and “emotionally disturbed” member of the group throughout her life. Her British counterpart, Cassie, dealt with similar issues in her chapter, but the blame seems to have shifted during the transatlantic translation. Cassie’s parents, though portrayed as equally ignorant of their daughter’s joys and sorrows, seem to be absolved in the larger perspective of the mental health industry that she is subjected to. Though there is very little emphasis on the effect of over-prescribing and drugs, the British mental health industry is instead criticized over its inability to understand the youth in their care. Cassie’s counselor is dispassionate, unprofessional, and apathetic. In contrast, Cadie’s counselors seem to actually have positive, caring attitudes toward their charge. One even suggests going off the drugs. The blame shifts to the shallow and inane mother and emotionally absent father, who ask “did they fix you?” but never “how are you?”

Throughout the episode, Cadie’s mother treats her daughter’s medications as edible panacea, whatever is needed to give her a family worthy of showing off. Her motherly advice, “feelings aren’t real – see these ribs? That’s real,” demonstrates her apathetic and a far more disturbed view of the world than any her daughter might have. The egocentricity of American parents is firmly condemned, and the frequent references to her impressive collection of pills exposes the manner in which Americans view pharmaceuticals: quick-fix pick-me-ups that the unauthorized and unhappy will use to escape their animus.

This episode was an interesting divergence from the British series that serves as a comment on specifically American culture. The creators find our parents and our need for rapid progress in pill form the root cause of Cadie’s angst. To be sure, any deviations the new series might have from the old will likely be rank with cultural opinion.