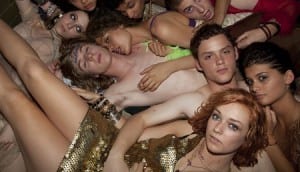 American television has been attempting to imitate popular British programming for decades, from a failed remake of Fawlty Towers in 1978 (renamed Chateau Snavely and starring Harvey Korman and Betty White) to the more recent success of The Office in 2005. Though the list of transatlantic programs is rife with failures that didn’t resonate with the American public, there has been a recent string of successes, mostly in the form of game shows (such as the classic Who Wants to Be a Millionaire? and Weakest Link) and a motley of reality series, including Supernanny, Top Gear, Undercover Boss, and American Idol. However, the translation from British to American culture was relatively smooth for most of these shows, considering the lack of artistic license in contest and reality television. Drama, and specifically teen drama, is another story entirely.

Skins, a wildly popular British drama on E4, has made the Mayflower journey like so many before it, yet many are skeptical of its appeal to American audiences. Its attraction to British viewers came from not simply the story, but the reality, and consequently the relatability, of the characters and their lifestyles. Because of the watershed on British television, “adult” content can be shown at any time between 9:00 P.M. and 5:30 A.M. This includes nudity, “foul” language, drug use, etc. Such a policy allows for a more realistic portrayal of teenage life, as expletives and drug use are frequent occurrences among the young.

However, the F.C.C. still bans “obscene” material during the American Watershed that occurs after 10:00 p.m. This includes all nudity and any swear words like “f**k” or “c*nt,” etc. that might find its way through the character’s lips. As a result, there is a systemic problem with American television that would discourage the American viewership from enjoying Skins.

In the pilot episode, a seasoned Skins fan will notice from the outset that the show will be a shot-for-shot remake of the original series. This is not necessarily a bad thing; the original show is popular for a reason. It opens with the series’ main character and group ringleader, Tony, going through his morning routine, among which is a timed observation from his window into a neighbor’s bedroom. In the original series, he witnesses an older, perhaps forty-five or fifty year old woman in the nude. The scene is voyeuristic in nature; the woman is going through her own morning routine. However, the American pilot features Tony looking from his window to find an early thirties “bombshell” blond waiting expectantly at her window with her *ahem* “sensitive areas” strategically covered by the window panes. The difference in the series reveals the systemic habit in American television of injecting sex into culture to counteract censorship. Instead of suggesting that the character is a voyeur, it suggests sexuality. Nudity is not necessarily sexual, but producers continue to equate the two in this series.

Furthermore, the scene is unrealistic, and thus, unrelatable. Many teens could confess to perpetrating voyeurism at some time in their youth (but probably wouldn’t), but few could claim having the relationship that the American series insinuates.

The second difficulty that the American series faces is language censorship. Although the American watershed allows most expletives, they still bleep particular language. Nothing provides a more realistic teen conversation than a well-placed f**k, but instead of listening to a well-performed dialogue, the viewer’s ear is assaulted with censor bleeps. There is no evenness or reality to the dialogue, but we do know that they said something naughty.

The final problem with the series itself is that, like The Office, it is a near word-for-word remake. Save the second episode, where Maxxie’s American counterpart is presented as a snarky lesbian, nearly 90 percent of the script remains unchanged. Although natural and even clever in the mouths of British youth, the writing sounds awkward and improbable coming from their American counterparts. The general storyline may resonate with American audiences, but the script deserves to be re-written to better fit its characters.

With only three episodes yet aired, it will be interesting to see if any further Americanization of the series changes the dynamic between the characters, or if there are any story or script changes that are distinctly original to this reincarnation. However, it might be too late. Despite all the advertisement and anticipation over its jump to the American television, few believe that Skins will maintain the viewership to finish out the season.