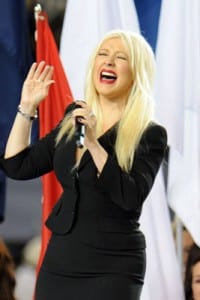 Christina Aguilera repeated a line while singing a rendition of the National Anthem before the start of Super Bowl XLV Sunday night.

When she got to the line, “O’er the ramparts we watched, were so gallantly streaming,” she instead sang “What so proudly we watched at the twilight’s last gleaming,” which is a repeat of an earlier line, substituting “watched” for “hailed.”

With that, the diva joins the likes of Macy Gray who said it was the “most embarrassing moment” of her life when she garbled the words to the Star Spangled Banner at the 2001 Pro Football Hall of Fame Induction, and Rosanne Barr, whose 1990 Padres/Reds game anthem is largely considered the worst ever.

Aguilera’s muck up set social media ablaze, as tweets started coming up as soon as she finished her mistake.

The national anthem preceded what many in the Twitterverse also consider to be the worst halftime show in 45 years.