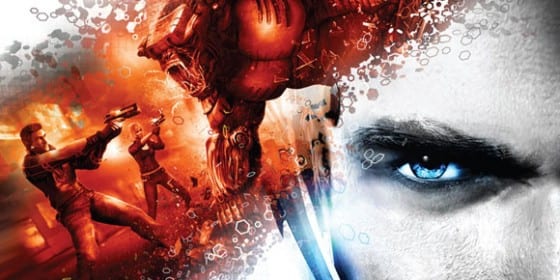 At the end of every year, we in the video game journalism world have a habit of making lists. We write about the best

games, the best console, and yes – we also write about the worst games of the year. Mark my words, in December of this year we’ll be talking about Mindjack, the new futuristic third person shooter for worst game of the year.

It didn’t start that way though; in fact Mindjack started as an impressive idea. Built on the framework of modern day third person shooters, Mindjackallows players to leave the bodies of their character, and take control of an enemy. It’s not the most unique idea (last generation we saw it in Battlefield 2), but we don’t see it much in this genre so it still feels a bit fresh.

In the year 2031, government as we know it has all but dissolved, and in its place stands resource controlling corporations. Throughout most of the game you take control of Special Agent Jim (no, seriously. The dude’s name is just Jim) as he and his partner Rebecca as you try to infiltrate the compound of the NERKAS corporation for some reason. The whole thing plays out like a really bad Sy-Fy channel weekend movie. Plot points are introduced, but never wrapped up, characters come in, but are never seen again, and worst of all, the game never takes the time to fully explain just what’s going on. It’s like we’re just supposed to accept that the technology to jump into someone else’s mind is now possible.

Much like Vanquish before it, the gameplay of Mindjack could best be described as an eastern take on the Gears of War formula. Hell, if you’re playing on the Xbox 360, the controllers are mapped to the exact same buttons; you shoot with the right trigger, aim with the left and roadie run by holding down A. The only difference, while in Epic’s flagship shooter they worked – here, they’re unquestionably broken. The biggest problem is that even the most civilian actions like moving to cover, reloading and shooting, come off as cumbersome and incredibly slow. Even the “Mindjacking” itself comes off as slow. Combine that with the fact that your enemies seem to be on a permanent caffeine binge and jump around incredibly fast and you begin to get an idea of just how frustrating of an experienceMindjack can be.

One of, if not the most memorable aspects of Gears of War and its sequel is just how memorable and satisfying the action is, yet another feature this game is missing. Take for instance the seemingly simple act of snapping to cover and firing at an enemy. Somehow, even if you line up the reticule exactly on your target, more often than not you’re going to end up shooting slightly off where you wanted. It’s incredibly frustrating and defies the basic principles of shooters. What’s more, there’s pretty much no logic to any of Mindjack‘s action (seriously, if you just ignore a boss for long enough, it seemingly defeats itself).

There’s a decently enjoyable multiplayer suite that essentially turns the entire single player campaign into one large death match, but it too suffers from the same problems as the main game. To be honest, with games like Bulletstorm, Dead Space 2 and Killzone 3 on the horizon, there’s pretty much no reason to play Mindjack. Flawed in nearly every way, Mindjack is the definition of a frustrating gaming experience.