Travelers and vacationers are all familiar with hotels such as Holiday Inn, Best Western, Sheraton and Hilton. These are typical accommodation options for the home away from home, and when staying there the traveling experience often lies outside the hotel doors.

But five hotels scattered throughout the globe exceed guest expectations with their uniqueness. How many people can say they’ve stayed in a hotel completely made out of trash, such as Ha Schult’s Beach Garbage Hotel? Unfortunately, that hotel was open for just a few days, but luckily for adventurous travelers, the world is full of imaginative hotels that are the destination. 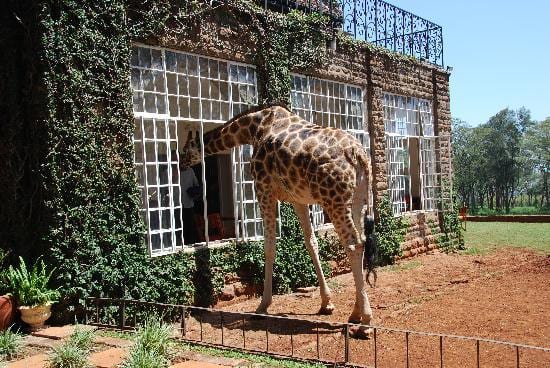 A giraffe mingles with guests at Kenya's Giraffe Manor (Media Credit/Fairmont123 via tripadvisor.com)

Right outside of Kenya’s Nairobi city center lies Giraffe Manor, a six bedroom estate on 12 acres of land. The accommodation was built in the 1930s and is home to a herd of endangered Rothschild Giraffes.

When guests eat breakfast in the sun room, all the windows are open so that the giraffes can come through and join the party. Guests are allowed to go out onto the terrace and hand-feed the friendly animals.

Originally, the estate was set up by the African Fund for Endangered Wildlife as a breeding center for Rothschild Giraffes, but now various other animals including warthogs, bushbuck, and 180 species of birds dwell within. Excursions may be arranged to the Kenyan National Museum, the Maasai Market and Nairobi National Park, but visiting Giraffe Manor and waking up to a scenic vista of the Ngong Hills is an experience by itself.

In Jukkasjärvi, Sweden, the ICEHOTEL is constructed each year out of ice and snow harvested from the Torne River, the hotel’s source of inspiration. The igloo-like hotel is the first and by far the largest ice hotel in the world.

Yngve Bergqvist, the founder of the establishment, began building the ice hotel in the 1970s and has been continuing the tradition under Kaamos, a tourism company.

Tourists flock to the ICEHOTEL for famous events such as the Northern Lights and the Midnight Sun. The temperature inside the hotel is around 23 degrees Fahrenheit. Guests enjoy amenities including hot lingonberry juice, breakfast buffets, morning saunas and ice beds that are lined with toasty reindeer skins. This hotel, which combines art and nature, is available to travelers up until its closing in April each year. 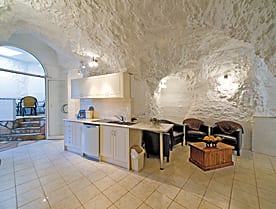 At Australia's PJ's Underground Bed and Breakfast, sleep beneath a 64-million-year-old roof

The Australian outback may look like nothing but rock formations for miles and miles, but deep in the White Cliffs are cozy underground rooms dug out of the opal stone that dates back to the Cretaceous period.

Guests wake up to freshly baked bread and homemade jam. They’re free to explore the two surrounding national parks, the Mutawintji Aboriginal grounds and the Paroo-Darling National Park, a wetlands habitat. The bed and breakfast is also accompanied by the White Cliffs Opal Pioneer Tourist Park and the Underground Bar and Restaurant. 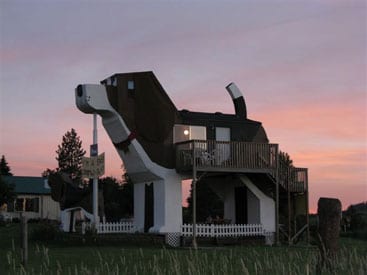 Any traveler who has ever wondered how man’s best friend views Cottonwood, Idaho, can now get in the head of a beagle and experience the real deal.

Since 1997, Dennis J. Sullivan and Frances Conklin have been running the Dog Bark Park Inn, home of the world’s biggest “beagle.” The inn sleeps only four, but this accommodation in the Camas Prairie is one of a kind. Guests enter the body of Sweet Willy, the dog building, and sleep in the head of the dog. The head is a loft room and the muzzle of the dog provides extra sleeping space for guests.

Apart from the various activities available, such as exploring Lewis and Clark country and whitewater rafting, Sullivan and Conklin sell a wide variety of chainsaw carvings in their mom-and-pop operation. All who visit the Dog Bark Park Inn Bed and Breakfast can leave with the “prairie’s best” fruited granola and over 60 different breeds and poses of dog chainsaw carvings.

The Lizzie Borden Bed and Breakfast 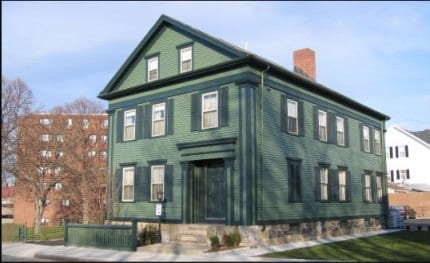 Staying at the Lizzie Borden Bed and Breakfast in Fall River, Mass., is the ultimate haunted house experience

On Aug. 4, 1892, Andrew J. Borden and his wife Abby Borden were found brutally murdered in their beautiful Victorian home in Fall River, Mass. The only suspect was their youngest daughter Lizzie, who was ultimately found not guilty. If Lizzie didn’t kill her parents, who did?

Ghost hunters and travelers are invited to sleep in any of the eight rooms available in the restored Borden homestead. Guests may even sleep in the exact same bedroom in which Mrs. Borden’s body was discovered by police. The Borden home will soon be part of an in-house Ghost Cam project, where subscribers can conduct their own virtual paranormal investigations via Web cams.

In addition to amenities such as free Wi-Fi, daily tours and admission to the Lizzie Borden Museum are provided. When guests wake up they are treated to a breakfast consisting of bananas, johnnycakes, sugar cookies and coffee, similar to the meal that the Bordens enjoyed on the fateful day of their deaths.