This list is especially difficult because it requires 20/20 hindsight vision to see what gadgets will look like in the year 2020. Most of the time people try predicting future gadgets, they never end up coming close.

I mean, did anyone think that there would be something like the smartphone 10 years ago? Weren’t we supposed to have robots in our home and flying cars by now?

This is my attempt at trying to guess what gadgets will look like over the next decade, taking into account consumer trends, marketability, and current research and development on certain types of technology.

1. “Can Touch This” Screens

One of the more promising technologies in this decade is the use of touch technology. We can expect to see touch compatible interfaces everywhere; our cars, TV’s, watches, cameras, (insert any device with a screen here). I am particularly looking out for touch watches. Tissot made their Touch Watch a while ago and the new iPod shuffle can be turned into a touch watch with the corresponding watch band. Soon, we should expect to see touch watches on the market capable of supporting apps, WiFi, the weather, you name it. This technology will also travel to tables and other types of surfaces. Microsoft has recently developed a touch table called “Surface” which gives the user a touch interface on a table top that they provide (think the desk in Tron meets the Minority Report computers in the look and interface, respectively). The use of this technology should allow us to drop our smartphones and storage devices directly on the table and then load pictures, video, music, various types of files effortlessly while simultaneously browsing YouTube and checking our email. Check out this video from ASUS who takes this technology to a whole other level.

Think Xbox’s Kinect meets the 3D viewing experience we are used to seeing in films like Avatar. Or better yet, imagine virtual reality helmets that give the viewer a 3D mapping experience, combined with the technology of Kinect’s motion sensors. Either way, there is promise for the future of gaming with both motion detection and 3D viewing. Just using the Kinect technology alone, we could start to see something like the interface in the film “Minority Report” and would allow a gamer to precisely motion control their entire gaming experience. Hopefully, the price of 3D HDTV’s will drop so much so that the gaming industry starts to integrate more of that technology into their games. Regardless of price for now, the future of gaming looks bright, but my only reservation is if these gaming companies allow for advertisements during online multiplayer play because that would really ruin it on some level for me. 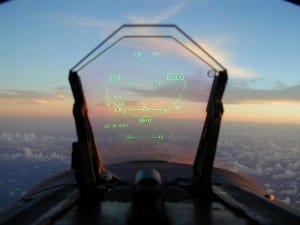 This one has to be my overall favorite pieces of tech that will be market bound in the not too distant future and in a decade from now, will hopefully be found everywhere. With this technology, lasers can project images up on a special glass surface to create what only fighter pilots have been able to see; colored graphics displayed on a windshield with a display of information. GM has had this technology in development for their cars for some time and they propose to display images on the windshield in front of the driver that display speedometer, RPM’s, temperature, along with outlines of the road or even 3D mapping of the surrounding environment. More applications of this technology are around the corner and might be found on our glasses or sunglasses, motorcycle helmets, or even mirrors. I like the idea of a bathroom mirror that can display the outside temperature, display your emails, a to-do list, and present the daily news headlines because we all need something better to look at than ourselves in the mirror while brushing our teeth. Check the video for a demonstration.

Imagine a decade from now, waking up in the morning and getting ready for work. You go to your door to pick up the newspaper and low and behold it displays images and texts moving like a marquee across the surface of the paper. Perhaps something that looks like one of those newspapers from Harry Potter, e-paper and flexible OLED (Organic Light Emitting Diode) technology can present a digital media source on what looks like a piece of film. The bendable, lightweight paper should be recyclable or at least capable of updating itself with new information. This is just an example with newspapers. Now imagine a world where all of the paper we use, all of the screens we watch, were made out of OLED technology. The applications are practically limitless. And why not save a tree or two along the way…

5. Interconnectivity and “The Cloud” 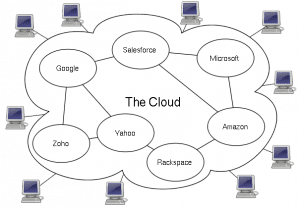 OK, so this is not necessarily a gadget, but this technology proposes interconnectivity between all of your gadgets, computers, and the like, to create a seamless experience with your own sharing network. This technology also isn’t particularly new, Microsoft has created “Windows Azure” for small businesses, but requires more work in the areas speed, security, and stability. Cloud computing can take it to the next level in this decade and allow everyone everywhere to have their own “Cloud”. In 2020, we should be able to experience instant downloads and uploads in media sharing, file sharing, and preferences between all of our computers, gadgets, cars, smartphones, and maybe even our homes. We would never again have to worry about backing up our precious data, programs, and setup because our cloud will always have everything ready to go in a flash of lightning without the rain.

This piece of tech is interesting. I predict that by the year 2020 there will be an influx of portable or even disposable health monitoring gadgets that track a person’s blood pressure, heart rate, calories burned, stress levels, glucose levels, etc. It seems that this tech will come in the form of a patch or a bracelet, but it could come in other forms as well when applied on or implanted in your skin to give the user real time information about their body’s activities. This will be especially useful for people with health-related issues, but also for people who like to exercise (ok, maybe not like, but at least participate) and want to monitor their results. Perhaps using “The Cloud” will allow the future device to upload the results to your smartphone and email you suggestions to improve your health.

As of now, voice recognition is close to hitting it big time. It can be utilized on smartphones, computers, and even IBM’s “Watson,” which has the sophisticated capabilities to recognize speech patterns, natural language, and then analyze the data. Ten years from now, we could walk into a room and give a command for whatever we want from music, temperature control, light control, to perhaps even appliance and device control. In 2020, we should experience instantaneous responses to human voice commands in all of our devices at home. This tech may not only improve the quality of life for the blind and handicapped, but would also be really cool in general. We should just be sure not to name the system HAL (where each letter after them in the alphabet spells out I.B.M). 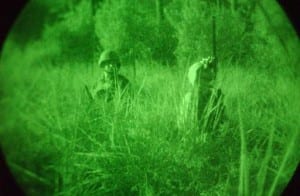 Currently, you can buy infrared vision technology on some types of BMW models (5 & 7 Series) and is certainly promising for the future. Using my 2020 crystal ball, I can see most cars having the ability to switch from day vision to night vision either through the windshield or through a camera that gives a visible feed to a screen on the dash. Windshield night vision (similar to HUD tech and also similar to using OLED tech) can turn the night’s windy road ahead into the visible spectrum for drivers so that everything seems “lit up”. With the camera, a driver would be able to check the screen for anyone up ahead on dark, dirt road. Drivers would clearly see all other vehicles, obstacles, and most importantly, the road when traveling at night. If this technology becomes widespread in the car industry over the next decade, I would bet that nighttime accidents would decrease significantly.

I’ve never had a problem with Vespa’s, scooters, Go/Mo-Peds and the like, but they really have left me unsatisfied as far as wanting one for personal use. I see that having one of these types of personal, compact “vehicles” is extremely useful in a city setting and if you are like me and are too lazy to ride a bike everywhere, your only options seem to be the Vespa route. However, the future looks promising for personal motorized vehicles and will likely see a big push in the upcoming decade. Everything from improvements to the Segway-type vehicle, the introduction of the YikeBike, or even the emergence of electric bicycles, will all likely be more common by the decade’s end along with other types of future looking personalized motorized vehicles.

Personally, I like the idea of the electric bike because of the fact that you can power the electric motor of the bike through a charge and by pedaling your way through traffic and are environmentally friendly.

For this last one, I am going to go against the grain a little and talk about a gadget that we will all might be waving “bye-bye” to in the near future. Ever since the introduction of a camera on the iPhone and other smartphones, digital photography has become even more portable and available in our daily lives. The technology has even gone further to include special applications to enhance user experience with special effects and editing. These smartphone companies are continuously figuring out ways to fit more megapixels on their phone’s cameras and third party peripherals are creating attachments like this one. Once they create a DSLR attachment, the personal digital camera may go the way of the Dodo bird, never to be seen again. This scenario might appear over the next decade simply because lugging around a redundant gadget will be inconvenient since your smartphone can capture HD pictures/HD video and then upload the media directly to your photo-sharing/video-sharing source.

So that’s the list. If you notice, I haven’t let my imagination run rampant because a lot of these technologies are close enough to making an impact on our daily lives sometime soon. With any luck, Nostradamus, Captain Hindsight, and the Mayans would all be proud of my future speculations and this is the best I can hope for when trying to guess the future of gadgets.