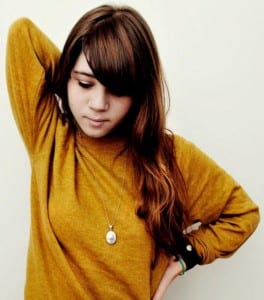 Singer Aly Spaltro, who goes by the stage name Lady Lamb the Beekeeper, may hail from Portland, Maine, but it’s Boston that has adopted the 21-year-old startup musician as a hometown darling.

Spaltro, who has self-released a handful of albums but is not signed to a label, was named Folk Act of the Year at the Boston Music Awards in December. She’s since found a cheerleader in Act of the Year winner and local icon Amanda Palmer, who Tweeted after the ceremony, “chick blew me away live. look up her stuff.”

Spaltro recently wrapped up a series of dates as the opening act for Evan Dando and Juliana Hatfield, and will support Faces on Film at Berklee’s Café 939 Thursday night.

Those who catch one of her live performances will be able to pick up a copy of her latest offering, “Mammoth Swoon”(most of the other recordings are available through her website) — a mish-mash of bedroom and live versions of songs in demo form. It’s country and folk influences that come through most prominently on the collection, although she tiptoes into PJ Harvey territory on the best-produced track, “Between Two Trees.” Cuts like “Crane Your Neck,” the aching “Aubergine” and the 10-minute pairing “Up in the Rafters/Bird Balloons” (“songs of longing,” she describes them) showcase Spaltro’s gift for heartwrenching, pining torch songs and her passionate, often raspy singing style. An early interest in poetry is evident in her lyrics, which refuse to rely on tired, sentimental clichés. “Absence makes the heart grow hollow/Make me into an egg without yolk,” she sings on “Aubergine.”

While the album consists primarily of rough cuts, the underlying quality of the songs themselves is undeniable, and it should be enough to sate the ravenous appetite for Spaltro’s music fans are sure to walk away with after seeing one of her captivating live performances. Because it’s on stage that Spaltro really shines. During a show earlier this month at New York City’s tiny Rockwood Music Hall, armed with only a guitar and a small amplifier, the unassuming, diminutive brunette had the audience in the palm of her hand. Her songs took on a haunting quality in such an intimate setting, even as she offered disarmingly friendly banter between songs.

Spaltro recently chatted with Blast about her early exposure to music (some might consider it a predestined career choice when members of Creedence Clearwater Revival hold jam sessions in your childhood living room), plans for 2011, and origin of her stage moniker.

BLAST: Did music play a big part in your life growing up?

ALY SPALTRO: My dad is actually a really killer musician. He’s a lead guitarist (and) used to make his own CDs. He didn’t really give them to anyone besides his friends and family, but I remember him sort of sitting there layering all the instruments that a full band would have, and making his own songs. He was randomly friends with members of CCR. … Whenever they played the place that we lived, they would come over and, like, have a jam session with my dad … which I was just really curious about as a kid. I would sit in and listen. Also, my next door neighbor when I was five was this 13-year-old named Lacey, and she got me into The Beatles when I was in kindergarten. And I just fell in love. I was obsessed with The White Album and I used to just sit there for hours and listen to The Beatles and oldies on the radio.

BLAST: Who are some of your musical influences? Did you have a defining moment when you knew music was going to play a significant role in your future?

AS: The Beatles were my first influence. I was really into Diana Ross & the Supremes, and The Mamas & the Papas, and The Isley Brothers and stuff like that. And then what really kind of re-changed my life as I got older (was), when I was 14, I went to a record store when I had just moved to Maine, and I randomly bought Neutral Milk Hotel’s first record, because I really liked the album art. … I brought it home and it just floored me. At that point in time, it was exactly what I had been searching for. And it kind of felt like I had to search no more, like it was all right there in front of me in Neutral Milk Hotel. And from then on, I started becoming really inspired by Jeff Mangum’s lyrics, which kind of prompted me into doing spoken word poetry and things like that in high school, before I started playing music. That really was, like, that moment for me. And it would be a few more years before I’d actually start playing music, but that sort of re-awakened a passion in me for listening to music.

BLAST: When did you begin writing your own songs?

AS: Poetry and spoken word was my main passion. But then, when I had just turned 18, I was really seeking more fulfillment. I wanted a challenge. I wanted to really invest myself in something big, something that would take all of me and something that I could hone in on and spend my time on and work really hard on. And I was passionate about the words I was writing, so I thought the next step would be to teach myself how to play some instruments. And I didn’t sing. I didn’t have any background in singing, besides to music I liked in the shower and in the car and things like that. But it just felt like the next thing to do. So I was going through this period where I was really miserable and wanted to get out of it, and found that singing really helped. And so I taught myself guitar and put all my words to music.

BLAST: How did you come up with the name Lady Lamb the Beekeeper?

AS: Three years ago, when I started playing, I was having trouble sleeping, because I was just so excited about what I was doing. Making the songs was so new and exciting that I couldn’t even wait to, like, get up and start working. So I was essentially recording a song a day for days and days and days, just working all day and night and finishing a track, and then starting a new one. And so, in my sleep, I was having very vivid dreams and I was also, at the same time, sort of writing lyrics in my sleep. And it was driving me a little crazy, because I kept waking myself up and really wanting to write them down. So I started keeping a notebook for lyrics so I could scribble down while I was dreaming them up or whatever, and then to also just double as a journal to just scrawl down phrases and visuals from my dreams, because they were inspiring me as well. And “Lady Lamb the Beekeeper” was written in my notebook one morning when I woke up. I have no recollection of what I was thinking of or dreaming of when I wrote it down. But sure enough, there it was. It was right around the same time when I was making recordings and wanted to put them together on a CD. And I wanted to have a moniker, so it felt like the most perfect fit.

BLAST: Congratulations on your win at the Boston Music Awards. What was that experience like?

AS: I love Boston. I feel so honored to have won that award. I had been working really hard for a year, trying to play as many shows in Boston as I could while living in Maine, and sort of building a fanbase there. And I realized that the Boston scene felt just as much like home as home did. The bands and the people that come out to shows, everyone’s so supportive and warm. I kept seeing the same faces and ended up making good friends playing in the Boston area. So I’m really excited to continue playing in Boston and play bigger shows there.

AS: This year, I really need to make my record. That’s the main thing. I think by early spring I’ll have figured that out. I’d like to do it in Maine. I just need proper equipment to be able to produce my next record so it sounds professional. I don’t have huge plans or huge hopes. It’s not my overall dream to be signed. I’m not doing what I’m doing now to get a record deal. I don’t have too much faith in that side of things right now. … I don’t know what’ll really happen (but) I think so far I’ve done pretty well on my own.

Lady Lamb the Beekeeper plays with Faces on Film at 8pm Thursday at Café 939, 939 Boylston St. Tickets are $12.