I’ve never had an Android. I’ve never spent a significant amount of time on one either. After all, my iPhone plays so nice with my iPad, iMac, AppleTV, Macbook Pro and Airport Extreme.

Android is fractured, inconsistent, and as recently discovered, produced from stolen code. It’s always seemed like the consolation prize for those who couldn’t get the iPhone.

Think about it–iOS and Android have both sold about the same number of devices. Until the last quarter, they were selling about evenly–and that was when the iPhone was available to less than one in four Americans.

Now that it’s going to go wide–what do you think happens?

Well let’s take a look at the customer base in America who have the option of Android vs. iPhone. 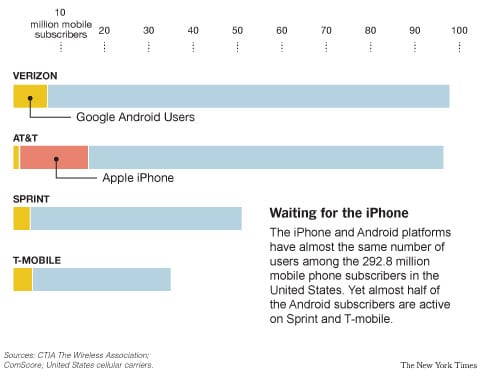 While there are obviously a lot of things one can take from this graph–for instance, there are a lot of potential smartphone customers still out there–the big thing is thus:

When given a choice between iPhone and Android, customers have spoken. It’s the iPhone.

So for those of you who have been boldly praising Google, calling Apple evil and a walled garden, it doesn’t seem to have resonated with the mass populace.

Come into the garden folks–it’s so nice. And, not potentially stolen.