The simple building blocks of the universe can be utilized to construct practical inventions that could make war obsolete, end hunger, solve the looming environmental crises and save spaceship Earth.

If you want to learn how, head to Harvard—not to a lecture hall, but to the American Repertory Theater, where a play is running that marries art and science in a way that would make its subject’s heart swell with pride. Buried in nearby Mount Auburn Cemetery, Buckminster Fuller, at least as he is imagined in this remarkable one-man show, embodies the best virtues we associate with Cambridge: brilliant innovative thinking derived from scholarship and employed for the benefit of mankind. I hope very much in fact, that current Harvard and M.I.T. students, and professors, will see this play and leave inspired to dedicate their gifts to service ahead of profit. 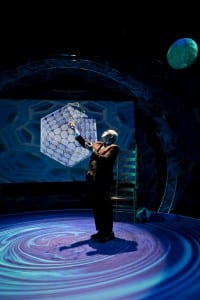 A Milton native, Fuller himself was actually kicked out of Harvard twice, once for cutting his finals to entertain a Vaudeville troupe he’d met in the Square, and a second time for simple lack of interest in his classes. He didn’t like memorizing things, he didn’t like how disconnected academic disciplines were from one another in the academy, and he didn’t believe half of what was being taught to him.  Like all great minds, he questioned everything.

At one point in his eccentric career, “Bucky” as he was often called, largely stopped speaking for almost two years. He read, studied and thought. He then immerged from this meditative chrysalis as self-appointed guinea pig. His experiment was to see how much one man with focus, discipline and drive could contribute to society. He began tempering his visions about the power of simple ubiquitous geometric shapes to designs for architecture and vehicles that could “do more with less.” His inventions were largely rejected by the industrialists who could have made them wide spread, but they influenced designers, engineers and—because of their emphasis on sustainability—environmentalists, immeasurably.

As his ideas began to come together he became a prodigious communicator, filling volumes with his thoughts and lecturing for stretches of up 48 hours at a time.  Playwright/director D.W. Jacobs had the opportunity to witness some of these talks as a student at U.C. Santa Barbara. Years later, he began his 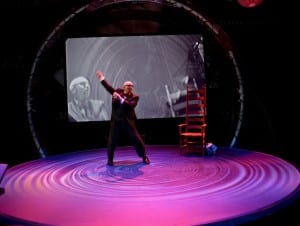 own monastic quest to create a theatrical experience that could give audiences a taste of what it was like to hear this great thinker free-associate on his far reaching ideas in a hypnotic examination of life from the particle level to the societal level, tying principals of physics, geometry and biology to human behavior and spirituality.

Jacobs’ achievement is immense. So is that of actor Tommy Derrah, who seems to have swallowed Bucky’s writings whole. Derrah finds the humanity, wonder and grace in the eccentric engineer and makes a two-hour lecture as compelling and emotional as any of the great dramas to have graced the Loeb Center’s stage.

R. Buckminster Fuller: The History (and Mystery) of the Universe, plays through February 5.