It’s like a breathing, pulsing, magazine feature with editorial cartoons, that not only talks to you, in person, but also sings you jaunty cabaret songs about housing policy.

It’s the newest work from the revolutionary “investigative theatre company” known as The Civilians, now in Boston for a very short run at ArtsEmerson. This engaging, intelligent and innovative work of theatrical New Journalism explores the clash between developers, state and local government, grassroots activists and independent citizens around the inception of the mammoth new sports arena now set for construction in Brooklyn.

The stadium to be known as Atlantic Yards will house the former New Jersey Nets basketball team, and will represent the largest building project in the history of Brooklyn.  It will be built in the long-struggling neighborhood of Prospect Heights, and was originally to be designed by Frank Gehry, the celebrated deconstructive-style architect whose buildings tend to look like they were squeezed and fondled after being taken from an oven too quickly. 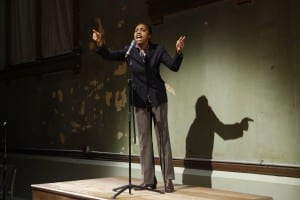 While developers and lawmakers lined up to boast about the new jobs and elevated stature the project would bring to the community, many actual members of the neighborhood worried that they weren’t being legitimately consulted about a process that would transform their home and more than likely uproot them. As the project gained momentum, the major players struggled to ally themselves with the right activists who jockeyed to position themselves as the true voice of the people.

Drawing from two years worth of research and interviews with stakeholders in this fight, the six-person cast of “In the Footprint” dons an impressive and colorful array of voices, mannerisms and viewpoints to tell the story from as many angles as possible. They turn themselves, essentially, into amusing caricatures of the people they’ve heard from, and yet the genuine passion of their subjects pours out passed their playfulness.

Whichever side one may take on the issues of whether or not the developers were within their rights, whether or not the lawmakers were on the peoples’ side and whether or not the activists choose the right cause–and they’re all presented well–no one can brush aside the primal response people have to the threat of losing their homes. We can all relate to their fear and it has to give us pause.

Unlike some of the Civilians’ previous shows, “In the Footprint,” digs down pretty deep into a single historical event rooted in a specific time and place without making an overt effort to universalize the issues. At its core though, is that profound, instinctual fear of being uprooted—and the chilling  idea that your democratic government could take away your land without your consent.

It’s powerful stuff, but the Civilians don’t just awaken it, they conjure it within a framework of well-articulated positions and well-researched facts—some of which, they sing to you.

In The Footprint: The Battle Over Atlantic Yards, written and directed by Steve Cosson, with Music and Lyrics by Michael Friedman, plays at the Paramount Blackbox through January 23.