This review originally appeared on ReviewCenter.com in 1997. It scored 4.5/5 stars at the time.

Wing Commander Prophecy is the fifth game in the series (prior games in the series named Wing Commander and Wing Commander II-IV). It is a return to the original concept of the game, reducing the gameplay options for more effort in the actual space simulation. Although it was enjoyable to have more decision-making capability in Wing Commander IV, the return to the simplicity makes the gameplay smoother and more movie like. Wing commander Prophecy is like taking part in a movie. Although you can choose not to talk to people, talking is always in your own benefit, so there really is little choice. 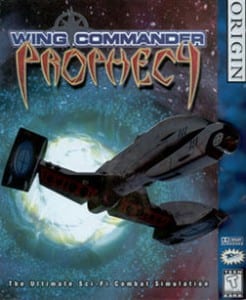 Warning there are a couple of double missions that force you to leave right away after you return to the ship, so always make sure that you have a time for two more missions before you play one more…. These game-play emergencies make the gameplay exciting and unpredictable, bringing back some of the excitement lost in the lack of options from Wing Commander IV. Some missions require a little luck to complete successfully, but ALL missions can be completed successfully (at least by the scoreboard, there are a couple that are mandatory failures from the mission you are sent out on, but you do not loose points for not succeeding).

Note that the “Gold Edition” is not a true sequel but rather it is an addition that includes all of the original Wing Commander Prophecy. The “Secret Ops” are additional missions to keep you “in the mood” until the next release of Wing Commander.

If you saw the movie and expect the game to be the same, you will be surprised or disappointed. The movie is based loosely on the original version of the game from the early 80’s. If you manage to find THAT game, it is like all games of that era, rather cartoonish, yet still exciting. I look forward to the next movies as well as the next games or even a remake of the original game based on the new graphics engines! (Origin are you listening?)

Downs:
Lack of game-play options, you are always flowing with the game, you are only truly in control when you are behind the stick in space. And then your only hope is to take out the enemy as fast as possible and take care of your wingmen.