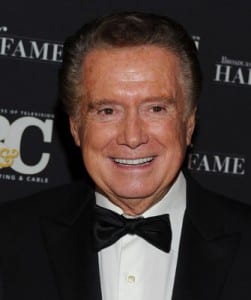 Regis Philbin, 79, said in a surprise on-air announcement on Tuesday that he was retiring from his morning TV show “Live! with Regis and Kelly” this year, after 28 years in morning television.

Philbin said on the show, “There is a time that everything must come to an end.”

When the audience was sadly quiet, he cheerfully said, “We’ll have a lot of fun between now and then, come on!”

He has co-hosted the show with Kelly Ripa since 2001.