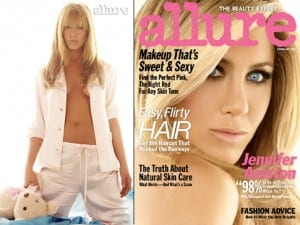 Jennifer Aniston changed her hair and is featured in the February issue of Allure magazine. In the interview, she says that she hated “the Rachel,” hairstyle introduced by the actress as Rachel Green in season 1 of the hit show “Friends.”

She said, “Have there been disasters? I think that’s a very relative term with hair. Let’s say there have been moments I’d rather not relive, like that whole Rachel thing. I love Chris (McMillan, her hairstylist), and he’s the bane of my existence at the same time because he started that damn Rachel, which was not my best look. How do I say this? I think it was the ugliest haircut I’ve ever seen.”

She added, “What I really want to know is, how did that thing have legs? Let’s just say I’m not a fan of short, layered cuts on me personally, so I don’t love revisiting that particular era.”