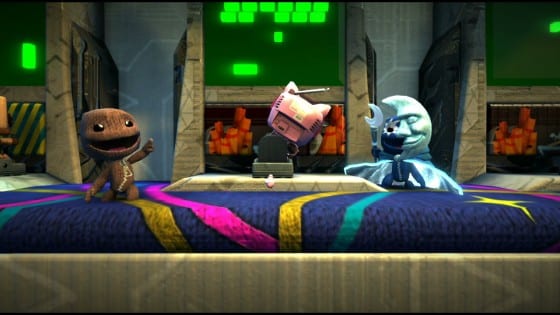 company built, but rather to plus them. This is, rather than completely take away from the original; they would take the experience, and add to what made it so good in the first place. Similarly, Little Big Planet 2, the highly anticipated sequel to PS3 DIY platformer feels an awful lot like a plussed attraction as Media Molecule has taken the formula set forth by the first game, added a ton of new content and created a wonderfully inventive world that still feels as familiar as the original.

On the surface, not much has changed between Little Big Planet and its sequel, as the core game remains mostly unchanged. Swing and platform jump across arts and crafts inspired worlds in search of stickers and prizes. A closer look though will showcase just how much work has gone into improving Little Big Planet 2 from its predecessor. Everything here is much more dynamic and rendered impressively well. The franchise is known for its distinct arts and crafts DIY inspired world, and here’s it’s much more imaginative than you’ve known from the first game. What’s cool is that even the levels and objects from the first game can be used in Little Big Planet 2 and they too are given the upgrade.

Little Big Planet 2’s campaign mode, which finds Sackboy aligning himself with a mysterious group known as “The Alliance” after a mysterious vacuum sucks up most of the world’s residents. It’s a cute little story, but much like the first game, you’re likely to ignore it as you progress through the game. What you’re not likely to ignore though is the phenomenal level design throughout the game. One minute your platforming from gap to gap like you’d expect and the next you’re navigating a segway like vehicle through a room with reverse gravity. Throw in some rather unique and ingenious (giant possessed cupcake anyone?) and you have a picture of what Little Big Planet 2 has to offer. The genius of the game and the franchise even is that the dynamic is always changing so you’re unlikely to ever get bored.

Of course, playing through the 30 levels of the campaign is barely even scratching the surface of Little Big Planet 2, as the real heart and ingenuity of the game comes in the game’s robust creation system. Diving head first into the game’s creation mode can be a bit daunting or even intimidating at first, but  luckily there’s fairly large number of tutorials (all voiced magnificently by Stephen Fry) that will get you caught up on how to use the game’s suite of tools. To say that Little Big Planet 2’s creation modes surpass that of the original is a gross understatement.

When talking about the game, Media Molecule co-founder Alex Evans quoted Henry Ford, saying “If I asked them what they wanted, they would have said a faster horse, I gave them a car.” This quote is perfect for the improvements made here, as everything has been made easier. Take for instance the action of creating movement, in the original it would take a multitude of calculations and different pieces tied together, here, it’s as easy as selecting the tool, tying it to the object and watching it go. There’s a slew of new improvements, including sackbots (a huge help to make created levels seems more populated), and the ability to record your own music assign specific movements to different buttons on the controller seamlessly.

This seamlessness translates well into the game’s community as well. Sure, you can send your level out to the masses with the click of a button, but the fun really starts when you start perusing the works of others. Play through their levels, rate them (on a simple frown or smiley face scale) and compare pins with others.  Sorting through levels is a ton easier as well; as you’re now able to search by a number of new descriptors (including the infinitely handy ‘Media Molecule recommends’) as well as the ability to create a cue of levels you’ll want to play on LBP.me.

Of course, Little Big Planet 2 isn’t perfect, and most of the problems are the same that haunted the first one. As a platformer, it’s a bit lacking at times, including a few curious button glitches and issues (come on, double jump?). It can also be said that some of the tutorials still leave you scratching your head at times, but given the depth of the game, it’s almost expected.

The Blast Factor: Depending on how much you want to put into it, Little Big Planet 2 can be either a small and fun platforming romp with friends or an extensive creation suite that you’ll spend hours on. Either way though, you’re sure to have a smile on your face as you play through one of the PS3’s most innovative and fun titles. Little Big Planet 2 is simply a stunning exercise in creativity and video games.