Instead of flying all the way to Hollywood for the Golden Globes last night (just assuming the invitation was lost in the mail) we watched the celebrity red carpet arrivals in high-definition last night, taking notes on the best and worst dressed: 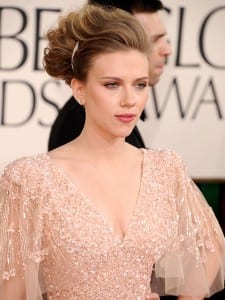 Light Pinks, Peaches and Nudes were shining on the red carpet. My favorites included the girls from Glee: Dianna Agron, Heather Morris and Naya Rivera, Helen Mirren, Sarah Hyland and Sandra Bullock. Scarlett Johansen’s dress was to die for – but Sandra Bullock will win every time on the best dressed list every time, due to ScarJo’s what-was-she-thinking hair. Also in the peach-pink color was a newly blonde Emma Stone, who is in the running for best backless with Anne Hathaway.

Christina Aguilera, January Jones, Jayma Mays and Christina Hendricks all puckered-up with Ultra-Red Lips attempting to evoke old Hollywood Style. Attempting is the key word, as they all looked washed out and trying too hard to be sexy. It’s time for this trend to go away and come back again another day. The daring, deep emerald green color didn’t turn out to be show-stopping because it kept popping up all over the red carpet – on celebs including Mila Kunis, Catherine Zeta-Jones, Elizabeth Moss and Angelina Jolie. Johnny Depp, we get it. Get a haircut. ScarJo is ending up on all the worst-dressed lists due to her eclectic Cruella-De-Ville inspired hair style. This “I’m-so-cool-I-don’t-care-what-people-think-if-I-don’t-do-my-hair” trend has got to go.

What Were They Thinking??

Helena Bonham Carter wearing a Vivienne Westwood looked like a cross between how my second grade art teacher dressed and the Cyndi Lauper collection circa 1985. Julianne Moore was glowing last night but that pepto-bismol pink asymmetrical puff-sleeve Lanvin gown was something out of a Pretty-in-Pink Nightmare. Olivia Wilde- looked like a prom queen’s dream in that glittery chocolate cupcake explosion Marchesa – but the gold sparkly stilettos were far from complimenting. Would not have been an issue except that she made it a point to show them off repeatedly. Sophia Vergara’s Va-Va-Voom Red Vera Wang is popping up on best dressed lists everywhere. I think those people forgot to check out the back! Leighton Meester, Nicole Kidman, Carrie Underwood and Vanessa Williams all made my most boring list. Yawn.

Jake Gyllenhaal’s easy, classic style wins him best in bow-tie for his Burberry tux. My absolute favorite menswear look was Robert Downey Jr. for his splash of color – going for a red-tie in a sea of black tuxedos. Although some unique and interesting fashion choices were made with unconventional jackets, Chris Hemsworth in Giorgio Armani and Chris Colfer both looked Hollywood handsome. Robert Pattinson and Zac Efron both went for a more mature look with new hair styles. On the worst-dressed side, Justin Beiber yet again proved he’s too young to be famous – sneakers and 3D glasses dressed down his D&G three-piece suit and no-bow-tie.

Michelle Williams flower-power dress was a disaster in all areas: style, fit, embellishment and color. Fashionista Heidi Klum is OUT and can leave the red carpet – the dress would be great for a tropical vacation and her make-up artist went way too heavy on the eye make-up. The ladies of Mad Men – Christina Hendricks and January Jones both were a disappointment in red. January mentioned that she requested the stylists on the show make her this dress in the red color – and they should have said no. Christina was a total disappointment. Christina Aguilera chose an ill-fitting, black lace over nude dress – that was as bad as her acting in Burlesque. Note to Xtina -stick to singing.

We’re still contemplating if Halle Berry, Mandy Moore and Jennifer Love Hewitt checked the mirror before they left. Halle’s black and Mandy blue dresses have both have different personalities above the knee and below – they should have cut them off. I forgot why Jennifer Love Hewitt’s was invited or why her performance in a Made for TV Lifetime movie was nominated, but her dress needed to be tamed at the chest and was just an awful color for her. There’s always next year ladies!

Mila Kunis wearing a dramatic Vera Wang one-shoulder gown was the envy in emerald. Eva Longoria was the essence of Hollywood glamour in a black, backless, bold and beautiful gown by Zac Posen. Kaley Cuoco pulled off the best of the nude dresses and looked young and fresh in a fitted bodice and tulip-tiered skirt nude dress. And I hate to say it, but a Lea Michele looked so pretty-in-pink with an avant-garde Oscar De La Renta pink princess dress that any Barbie would die to wear.