“There must always be a part of you that this war can’t touch.”

In the Democratic Republic of the Congo of “Ruined,” it sounds like the most desperate and flimsy of hopes. The words are spoken, in a rare and fleeting moment of tenderness, by Mama Nadi (Tonye Patano) the owner of a saloon and brothel in a small mining town. Her chief customers are the minors of precious metal, military gangsters who spill blood to control it, and businessmen who try to exploit it. As long as they check their ammo at the door, she provides them with watered-down liquor, cold Fanta, and unlimited access to beautiful women who have already endured the most gruesome of horrors as pawns in the capture of marauding soldiers.

Mama Nadi is as charming as she is pragmatic, a mother and pimp. We want to love her but the more we see of her business dealings and the more we feel for her charges, the more unlikely it seems that she or anyone else we meet in Mama Nadi’s Place, has a part untouched by the relentless atrocities they live amidst.

Our challenge, as audience members is allow ourselves to be touched. To do so, we need the gifts of a master playwright and Lynn Nottage is that. Rather than dwelling on the terrors of the battlefield, she focuses her drama on a collection of nuanced, sympathetic characters battling for their souls.

Christian (Oberon K.A. Adjepong) is both a poet and a businessman. A supplier of precious goods, he comes to woo Mama Nadi’s hand with romance—and sells her woman along with the cigarettes and sweets. One of these women is Sophie (Carla Duren).  Too crippled by her former captors to continue to sell her body, Sophie, comes as a packaged deal with the beautiful Salima (Pascale Armand) and pays her keep as a bookkeeper and singer. 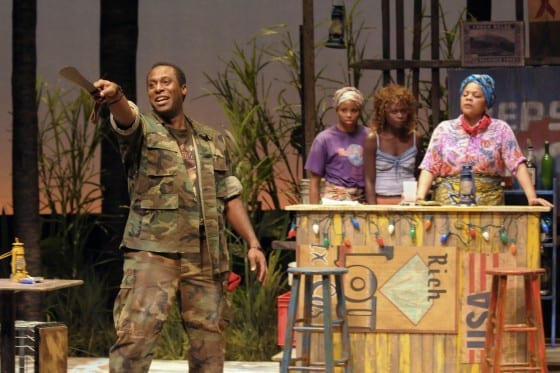 Hard working as they are, Sophie and Salima are lorded over by Josephine (Zainab Jah) the daughter of a former tribal chief who fights to maintain her high status even as she is being led on by Mr. Harari (Joseph Kamal), a foreign businessman who promises to take her far away to a cosmopolitan paradise, and passed around between miners, warlords, and soldiers.

At times, the world of “Ruined” can feel foreign, thanks in part to efforts of scenic designer Clint Ramos, lighting designer Lap Chi Chu, costume designer Kathleen Geldard and sound design by Broken Chord who create an impressively immersive experience—but in fact, its plot and setting mirror that of many American Westerns. Often set in saloon’s that doubled as brothels, they too feature miners and gangsters mixing it up in lawless territories. Sometimes they even checked their weapons at the bar to take in a cabaret show.

That’s the case in “Ruined” where the strumming of rhythmic guitars takes the place of tinkling out-of-tune pianos. Some well placed songs, often haunting add an element of theatricality that keeps engaged through the play’s darkest moods.

While Westerns tend to focus on men, the moral codes they forge and the stands they are forced to take, Nottage, focuses on women. Her research for “Ruined” included interviews with female victims of the seemingly endless Congolese civil war, and her project is to bring us their voices.  We learn here of the struggles, the endurance and the impossibly difficult choices made by the woman who are so often depicted simply as bargaining chips or collateral damage.

These voices are certainly fully realized in this production. The entire cast, its women and its men, are magnificent, first-rate storytellers. Each character has a complex struggle with great strength and great weakness on display. Director Liesl Tommy has mounted as strong and as affecting a tragic drama as I have seen on a Boston stage.

A Co-production of the Huntington Theatre Company, La Jolla Playhouse and Berkeley Repertory Theatre, “Ruined” plays at the B.U. Theatre through February 7.