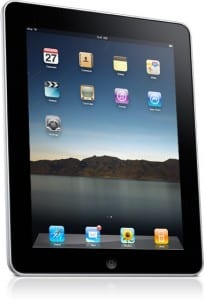 We see it everywhere. Whether it’s some 40-something playing with it on the subway going into work, or a greasy-fingered kid playing games on it because their parents gave into their incessant whining, or from inescapable channels of advertisements that bombard me with that silly jingle, the Apple iPad is everywhere. I am not saying that it doesn’t offer its benefits for some. If you are a person that is an Apple fanatic and really love everything that Apple spews out of their factories, then by all means go crazy with it. But with the way technology is today, there is always better and there is always the possibility of getting better, so why would I limit myself just for the brand name?

I think that the right tablet will eventually replace the laptop/netbook. Personally, I am waiting to buy that “right” tablet because of the many functions it can serve, some of which the iPad does not offer. First, the iPad doesn’t have USB or HDMI ports. Without those, Apple is limiting their customers to only use Apple peripherals (which are both costly and limited). If they had just one USB port I would be able to take the iPad to class and plug in my wireless keyboard/mouse and type up my notes through there. Also, without a USB port, tethering applications are useless and as a result I wouldn’t be able to use my cell phone’s 3G service and save that extra dough from purchasing the iPad’s 3G service. Lastly, I wouldn’t be able to attach a camera and use Skype. Without an HDMI hookup, the iPad cannot connect to my HDTV to play all the media that I would put on my iPad.

Among other things, I am looking for a tablet with 3.0 Bluetooth (which is about 8x faster than the iPad’s 2.1 and supposedly drains less battery), a camera (one that swivels back to front would be ideal and with at least 5 Megapixels), and I am looking for a tablet where I can replace the battery (the iPad is an enclosed unit and not being able to replace the battery really grinds my techy gears). I also want a tablet that supports widgets because they are personalized shortcuts that expedite all the information I want at a fast glance on my home screens. Lastly, it is paramount that the tablet be able to support flash because the better websites out there are flash enabled and without it, my internet capabilities are hindered and that makes me a sad panda.

So in the end, I will not go into the clinically white and sterilized environment of an Apple Store just to buy a product that is limited and gets more expensive with each add-on that should come free. This is why I am going to wait for a better tablet to replace my laptop/netbook and I promise it will never be an iPad.