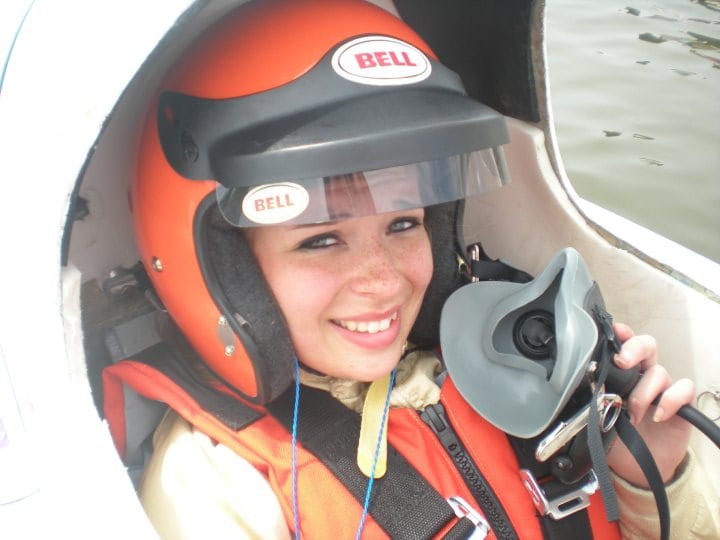 It was the middle of February 2010 and snow was falling at a rate that had never been seen before in Cincinnati. It was a massive storm that would eventually dump over 20 inches on a portion of the Midwestern and Southern regions of the United States. The area was at a standstill, and there were few cars on the road. Most of those who braved the storm had Ohio license plates and were driving timidly through the snow-covered roads.

But there was one car, with Massachusetts plates, that moved confidently through the passive cluster of automobiles. The driver, Jan Hoosick, and her 15-year-old daughter, Leah, have racing in their blood, and were hurriedly getting back to their home in Amesbury, Mass., a 14-plus hour drive up I-90 East. Their car moved with precision as a large hydroplane boat, which was hitched to the bumper, followed its fluid progress. This is a family of hydroplane racers, and Leah had just decided to partake in the family tradition. Jan had found a good boat for Leah, and they had to drive to Cincinnati and back to get it. There was no time to waste, as they had to get back home and work on the boat to get Leah prepared for competitive racing.

A mere 10 months later Leah would be named the American Power Boat Association (APBA) Rookie of the Year.

Jan Hoosick grew up with powerboat racing. Her dad raced, her uncle raced, and her brother, Charlie Smith, was a national and world champion in the 2.5 liter stock class. As a child, and throughout adulthood, she would always work as a member of the crew, helping to prepare boats for competition. She is still an active participant in the sport, as she was just elected APBA’s inboard chairman for New England. On Father’s Day 2009 she decided to take Leah, who was then between her freshman and sophomore years at Whittier Tech in Haverhill, Mass., to see her cousin Kevin race in Syracuse, N.Y.

“She sat and watched and didn’t say too much about it,” said Jan. “We went to a couple more races and she still never really said anything.” Then on Christmas 2009, Leah surprised Jan by expressing interest in the sport.

“I knew my grandpa raced boats and when I saw my cousin race in Syracuse, I said to myself, ‘This looks fun; I want to try this,” said Leah.

After traveling to Cincinnati to purchase the starter boat for Leah, the two began working on the boat as a two-woman crew, putting in long hours making sure the boat was ready for competition. Leah passed a few safety tests and paid for her APBA membership, and she was ready to race. 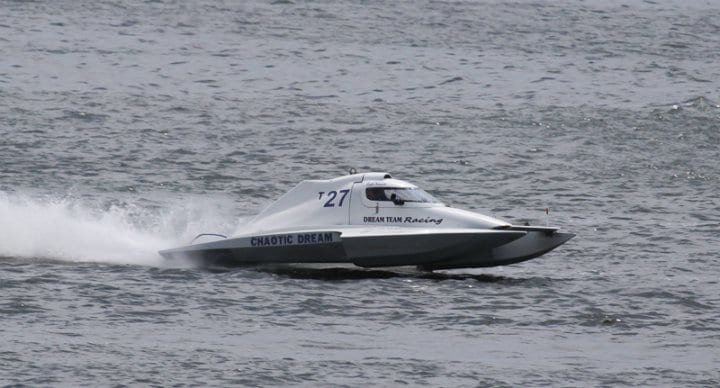 The first time Leah drove her boat, which she named Chaotic Dream, was during her first race. The reasoning behind this, which at first seems somewhat insane, is made clear by the fact that an individual cannot practice driving a boat going over 80 mph on a lake, as it would cause a disturbance; only when the lake is shut down for a race can boats travel at that speed. This is a sport where the craft is perfected in competition. Unlike other sports in which hours upon hours of preparation are put in and coaches agonize over details, hydroplane racing is instinctual. You need to trust every movement you make. The course is generally a one mile oval, and in Leah’s class there are five laps total. The boats average between 70 and 80 mph during races. Competitors can be as young as 14, but Leah, at 15,  was the youngest competitor in the APBA that year. Her class had competitors up to age 58.

The racers routinely jockey for position by maneuvering between one another with their boats literally hovering over the water. Crashes are typical and hospital visits are common. As a crane lowered Chaotic Dream into the water for the first time in Portsmouth, Va., on April 27, Leah was visibly nervous.

“Leah was very anxious, and I spoke to her right as she went out for the first time,” said Steve Armstrong, a high-level APBA competitor and family friend. “I told her to keep the buoys on her left and she would be fine. And I said, ‘If you get scared, just shut it off.’”

Leah reluctantly left the dock, but she didn’t have to shut it off.

“When she came back,” Armstrong continued, “it was clear we had another racer.” Leah was hooked on the sport, and her mother knew she was in for a lot of traveling.

“When she came back smiling I knew the investment was good,” said Jan.

Throughout the spring, summer, and fall the Hoosicks drove from their Massachusetts home to various parts of the United States and Canada, traveling as far as Michigan and Kentucky. On many occasions Leah would be dismissed early from school on Fridays so she and her mother could begin their weekend trek.

As she spent more time around the sport, Leah began to realize how close-knit the boating community is. People began taking a liking to her, at first because she was the youngest competitor in the APBA, but then because she showed a passion and respect for the sport that was undeniable.

“To win the Rookie of the Year,” said APBA Inboard Executive David Shaw, “Leah not only had to do a better job of driving than other rookies in the 1.5 stock class, but she had to do better than all the rookies in all other classes in the Inboard Division of the APBA.”

At one point in the season Leah cracked an exhaust manifold, which would have made her boat unable to race, but an experienced competitor came to her aid. “It was in Conewango, N.Y., and one of the higher class racers welded my manifold for me in his camper. It saved my boat for the race,” said Leah.

As the season wore on, and more and more people started to recognize this 15-year-old girl and her crew-chief mother taking the lower division by storm, Leah started climbing the standings in her division. At the end of the racing year she finished fourth in total points in her division of 15 racers, including a second place finish at the biggest race of the year in Valleyfield, Quebec, where there were over 100,000 spectators. But the scariest moment of year came in the last race of the season.

“In hydroplane racing you have mother nature to deal with,” said Jan. “If she decides to be gusty, these boats run above the water. A gust of wind can toss a boat over backwards in an instant.”

On one of those gusty race days, Leah hooked it going into her first turn after trying to take too sharp an angle. Her boat spun around, narrowly avoiding passing boats, and she did a 360-degree turn going 80 mph. Leah was taken away in an ambulance and treated for whiplash. She fully recovered and remains undeterred.

“I remember coming in after my first race and saying, ‘I need to go faster.’ So hopefully I can gradually move up in classes and do just that: go faster,” she said.

There is a ritual in boat racing. When a competitor wins her first race, she’s thrown into the lake in celebration. Steve Armstrong can’t wait until that happens for Leah. “It won’t be long until she gets her first win,” he said.  “And I’ll be the first one there to throw her in the water when she returns to the dock.” Although that type of admiration from her peers and superiors is alluring to Leah, she simply just loves to race.