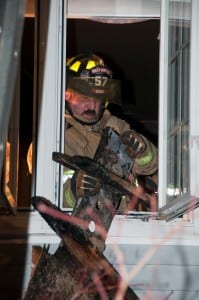 A Derry, N.H. split-level house was damaged in a Saturday evening fire, but fire officials said that working smoke detectors and quick thinking may have averted real disaster.

Residents were home when the fire broke out, and the homeowner was alerted by the smoke alarm. Residents tried to put out the flames with a fire extinguisher while calling 911.

Firefighters arrived and went to work, conducting an aggressive interior attack to contain the fire to the living room. The fire started in a faulty fireplace.

“Fire investigators suspect the fire was smoldering, undetected, in the wall behind and above the mantle for several hours before breaking out and setting of the smoke detectors,” fire officials said.

The fireplace was badly damaged, as were a few walls and the living room, but the house was saved, and it can be repaired, fire officials said.

No one was hurt. The residents will stay with family until the house is repaired.

“This fire illustrated the importance of operating smoke detectors,” said Battalion Chief Jack Webb. “The Derry Fire Department wants to remind everyone that they should have smoke and carbon monoxide (CO) detectors installed on every level of a home, as well as smoke detectors in every bedroom. Test smoke detectors regularly and replace the batteries whenever you change the clocks. Furthermore, any detector that is over 10 years old should be replaced.”