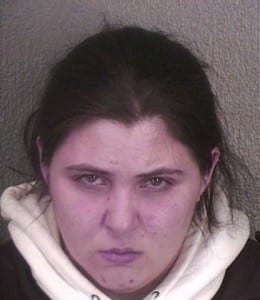 A Chelsea woman was held without bail after her arraignment on murder and arson charges in the wake of the Christmas Eve house fire that killed a 20-year-old living in another apartment in the house.

Melissa Pfeiffer, 26, and her boyfriend lived at 265 Spruce St., in a lower level apartment. The fire killed Crystal Lynn Blanchard and seriously injured her boyfriend, who were trapped in a unit above the blaze.

“In the evening of Dec. 24, the defendant and her boyfriend became involved in an argument,” Assistant District Attorney Mark Lee said. “Generally speaking, it was over money. The argument ended at about 10:00 or 10:30 p.m. and the boyfriend left the building.”

Pfeiffer’s boyfriend returned to the building at about 11:00 and saw Pfeiffer leaving the building, Lee said.

A short time later, a group of people driving by saw flames coming from the building and called 911.

Lee said that Blanchard and her boyfriend were trapped by smoke and flames on the building’s second floor. The boyfriend suffered serious burns before finally jumping from a window and further injuring himself.

“Miss Blanchard was unable to get out of the building,” Lee said. “She subsequently died of her injuries.”

Lee said that two witnesses cam forward and reported that Pfeiffer had admitted to setting her boyfriend’s clothes on fire.

Pfeiffer was held without bail.