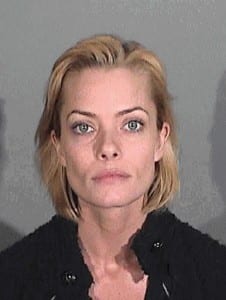 Actress Jaime Pressly, 33, has been arrested in Santa Monica for investigation of driving under the influence of alcohol.

She was stopped for a traffic violation around 11 p.m. Wednesday and booked on suspicion of DUI.

The Los Angeles County sheriff’s website reports that Pressly spent the night in jail and was released Thursday morning after posting $15,000 bail.