I know who dies at the end of “Harry Potter and the Half-Blood Prince.” And so do you.

J.K. Rowling’s first book about the boy wizard who saved the world (a lot) came out when I was twelve years old. I was the perfect age for it, but I also had a contrary streak as wide as Greenland. So while my classmates were falling in love with Harry, Hermione, and that ginger kid they hung out with, I was firmly against becoming a Potterite.

Years later I can admit my mistake. I consider it a sign of deep personal growth that I can embrace the fact that I was wrong to dismiss Harry Potter just because everyone else liked it. That’s my excuse, and I’m sticking to it.

Now that I’m older, wiser, more mature, and far less contrary, I can readily say that J.K. Rowling did a wonderful thing for the world when she introduced us all to Harry Potter.

This is why I recently decided to read all seven Harry Potter books and watch all of the movies.

With the seventh film just recently released in theaters, it seemed the perfect time to embrace the series I had so wrongly dismissed in my youth. Turns out Harry Potter is kind of awesome. Who knew? (Everybody except me, apparently).

My childhood best friend is a dyed-in-the-wool Potterite. When I told her about my new project, our conversation went something like this:

Me: I’m also watching all the movies.

Friend: What book are you on? Tell me quickly so I don’t spoil anything for you!

Me: Well, I’m on the second book and I just finished watching the fourth movie…

Friend: What! How can you watch the movies before reading the books? Aren’t you worried about spoilers?

Me: Relax. I already know what happens anyway.

Friend: But how can that be?

Me: It’s impossible to be alive today and not have Harry Potter spoiled for you. Everyone talks about it, because they assume that if you haven’t finished reading the latest book forty-eight hours after it has been published, you are either illiterate or living on Mars. I’ve known how the series ends for years.

Friend: Ok, that’s one thing you know. I bet you don’t know—

Me: (SPOILER) kills (SPOILER) at the end of The Half-Blood Prince.

Friend: Yeah, but you don’t know why—

Our conversation continued like that for awhile, with my friend testing my knowledge of Harry Potter and me answering correctly despite never having read the books or seen the movies before. At the end, she had to concede that I was right:

We are living in a post-Potter world.

You know all this stuff, and if you honestly don’t believe you do, all you have to do is ask the person sitting next to you. They’ll tell you why (SPOILER) was expelled from Hogwarts, and their tone of voice will tell you that they think you’ve been living under a rock for the past ten years.

Living in a post-Potter world means that people just talk about Harry Potter like it is current world news or last night’s episode of “American Idol.” They assume that if you don’t know that (SPOILER) (SPOILERS) then you must have suffered some kind of traumatizing blow to the head that caused you to forget the final pages of “Harry Potter and the Goblet of Fire.”

They assume that you too have read and worshiped the words of J.K. Rowling, that you know the plots of her books intimately, and that you therefore wouldn’t be opposed to some open discussion on why (SPOILER) appears to hate (SPOILER) so much.

The only people safe from Harry Potter spoilers are small children, and that’s only because the world assumes their parents haven’t finished reading The Sorcerer’s Stone to them yet.

Harry Potter has become such a staple of our collective culture that it’s impossible to ignore. You can’t be oblivious to Harry Potter. Even if you are innocent enough not to know that (SPOILER) is the (SPOILER) in “The Chamber of Secrets,” you at the very least know the following information: 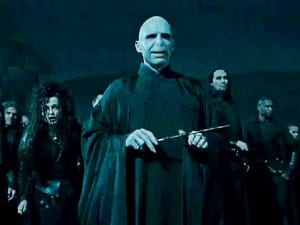 a) Harry is a wizard.

b) Harry goes to wizard school.

c) The game of Quidditch makes no practical sense.

That’s assuming you’re deaf and have been meditating in Nepal since 1999.

As the population of the universe troops off to watch Harry Potter and the Deathly Hallows on the big screen, is anyone really surprised? Is anyone sitting at the edge of their seat wondering, “What happens next?” I sincerely doubt it. If anything, they’re all waiting to see how the movie differs from the book in some minute way.

We live in a post-Potter world, but this isn’t necessarily a bad thing. I’m not trying to say that Harry Potter is any less of a good story because we all know that (SPOILERY SPOILERY SPOILER). On the contrary: It is one of the story’s strengths that despite being spoiled for millions of first-time readers, Harry Potter continues to have great literary strength and entertainment value.

I knew about (SPOILER)’s secret before the pivotal scene in “The Prisoner of Azkaban.” That didn’t make it any less exciting for me when Harry, Hermione, and the ginger kid found out. And how cool was it when (SPOILER) made his grand exit from “The Order of the Phoenix” by getting carried off by (SPOILER)?

In an age when we consume entertainment in 140 characters or less and YouTube-video-sized chunks, Harry Potter remains the absurdly-long book series that people of all ages will stay up at night reading. Even in a post-Potter world, J.K. Rowling’s books are exciting, entertaining, and (dare I say it) of literary value. They are what a good book should be: Timeless. For this late-blooming Potterite in a post-Potter world, they cannot truly be spoiled.

So this weekend I’m going to go see “The Deathly Hallows” (before I’ve read the book) at the movie theater with my die-hard Potterite friends. And I’m going to enjoy it (Even though I already know that (SPOILER) can’t be (SPOILERED) by (SPOILER) because of (SPOILER)).

Oh yeah, and Hermione kills Hagrid to avenge the death of Snape.