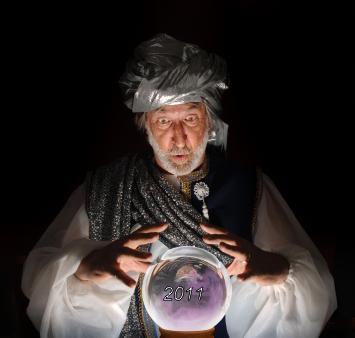 Oh 2010, we remember it like it was just last week. But now, on to the future! Here’s what we think will happen in the gaming world in the year 2011.

E3 brings a brand new Wii: It’s pretty obvious that Nintendo needs to do something with the Wii brand. What was once cultural phenomenon, has since become just another gaming system in the wake of Kinect and Move. Does the Wii still sell? Of course, but the numbers have dropped 21% over the last year, and there’s not really anything on the horizon to change things around. Expect Nintendo to finally confirm, and unveil the Wii’s successor around this year’s E3. It’ll have spruced up HD graphics, a new take on motion gaming and finally an updated and respectable online service — just don’t expect those friend codes to go away completely., Nintendo will look to keep their family friendly image as much as possible.

The year of the PS3: Yeah, we know; you’ve heard it all before, but 2009, 2010 2011 will be the year of the PS3. Well, let’s clarify that — it’ll be the year of the PS3 for hardcore gamers. Microsoft already announced that this year will be all about Kinect, and while that’s sure to mean a few core titles (see below), most will be what you’d expect from the motion peripheral. Enter Sony. With titles like Uncharted 3, Little Big Planet 2 and DC Universe online, Sony has made it clear that they’re not giving their entire year to their motion control system.

Further defining motion gaming: 2010 was all about motion control, but the idea behind it is so scattered that no one knows exactly what it can or should be, but look for both Sony and Microsoft to begin to change that in the new year. Titles like Suda 51’s Codename D will help bring Kinect to be taken seriously by gamers who view it as a passing fad. Sony will continue to attempt to integrate the new Move technology into their core titles. Will motion control be completely accepted by gamers by the end of 2011? Nope, but expect big strides to be made towards it.

No new GTA: Sorry folks, but don’t expect to hear about a new Grand Theft Auto title in the next year. While we have no doubt that one is being worked on, you’re unlikely to hear much about it until at least 2012. Think about it, Rockstar has LA Noire coming out this year, how much did you hear about it before Red Dead Redemption came out? Rockstar will be putting all of it’s creative energy and effort into it’s detective game (it reportedly cost a pretty large sum to make). Once the game nears release, it’s possible we’ll hear about a new GTA, but don’t expect much before it.

Half-Life 3 becomes official: This one is more of a ‘please?’ kind of wish than a prediction, I want to see Half Life 3. You know what, it doesn’t even have to be Half-Life 3, it can be a new Half Life 2 Episode, or even Gordon Freeman’s Go-Kart Bonanza — I just want something new from the Half-Life world.

What are your predictions for 2011? let us know!