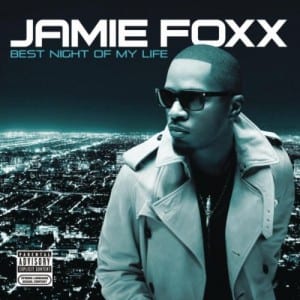 Jamie Foxx only achieves mediocrity with his release of his album Best Night of My Life on December 21. This release falls in the gray area on the spectrum of R&B albums. The whole album does not stand out as drastically different, yet only some songs fall into the same format of previous albums. Most likely, Foxx fans will only be compelled to give it a shoulder shrug after playing it.

“Winner” was released earlier this year and received a lot of radio play, making it the only song on the album sure to get your head bobbing. The song features T.I. and Justin Timberlake and was used during promotions for the 2010 NBA Playoffs. If it does not stand out as a lovable track then it is at least recognizable as a commercial hit.

Unfortunately the rest of the album has lackluster tracks that are quite forgettable after a first listen. The beginning songs feel more like a hip-hop album versus R&B and feature many rappers including Drake, Ludacris and Rick Ross. The last half of the album is mostly ballads with only Foxx singing on the tracks. Some songs deviate from the signature sensual style that Foxx has established with his last two albums, which works great for songs like “Winner,” but is unfortunate for “Freak.” “Freak” maintains Foxx’s voice and uses little auto-tune, but the techno-style beat of the track distracts from the lyrics. It stands out from the style of the rest of the album and might provoke a skip from Foxx fans.

Moving away from ballads and songs that prominently feature his voice, Foxx uses more auto-tune and up-tempo beats for many songs on this album. He begins the album with a cover of Natalie Cole’s “This Will Be.” While the song has an old school feel, Foxx quickly dissipates any hopes of a soulful album by auto-tuning his voice for the intro. He follows the intro with the track from which the album gets its name, “Best Night of My Life.” This track is more of an expected Foxx style and gives some familiarity to his fans.

His album Unpredictable still stands as his best release yet, with many popular singles including “Unpredictable” and “DJ Play a Love Song.” Foxx’s release of Intuition was disappointing, but the singles “Blame It” and “Just Like Me” carried the album and helped it to still get some positive attention.

Foxx has released “Fall For Your Type” featuring and written by Drake as his first single on the Best Night of My Life album. Some have already heard Drake’s unofficial version of the song, which Foxx used as a reference track. The single sounds like Drake’s signature style and has the unfortunate challenge of overcoming perceptions that Drake’s version is better than Foxx’s.

Best Night of My Life is a decent album but Foxx has not reached the bar that he set for himself with Unpredictable. If fans are looking for a classic Foxx R&B album then they may want to look elsewhere, but he may be attracting a new group of listeners with the variety of music styles present on this album.