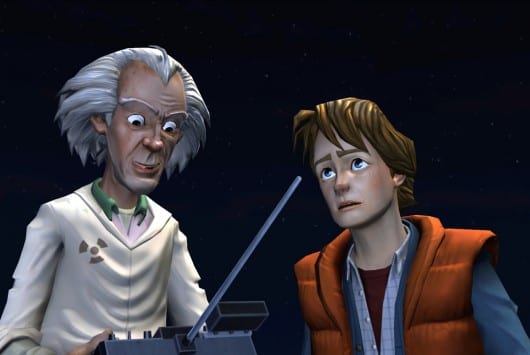 It’s dangerous to make a licensed game, but it’s even more risky to do so with a cult favorite. Look what happened when

Jaws was made into a game. Yep. You got to play as the shark. How lame is that? Remember Reservoir Dogs? The Godfather? Ghostbusters?  You can imagine how I felt then when Telltale Games announced that it had acquired the rights to the Back to the Future films, my absolute favorite franchise as a child and would be making a series of episodic titles based on them.

Much to my surprise, Telltale has written an admirable, yet sometimes flawed love letter to Robert Zemekis’ time traveling trilogy.  Thanks to mostly stellar voice acting, a unique art style and some impressive writing, the latest tale of Marty and Doc fits right into the canon set forth by the original movies.

For months, Telltale’s Back to the Future game has been billed as the first proper tale to take place after the events of Doc and Marty return from the Wild West at the end of Back to the Future III.  While it does fit chronologically, the game more often feels like it’s a lost episode of the old Saturday morning cartoon series based on the films. Taking place six months after the end of the first film, Marty is having trouble adjusting to life without Doc. What’s worse is that Doc left all of his possessions behind, and the bank is looking to sell off his estate. Just when things look their worst, The Dolorean appears with a taped message from Doc – he’s in trouble. It’s up to Marty to find out where in time Doc is and save him.

Spoiler alert – he’s in the 1930s. While it may not touch the world’s created in the films, the prohibition era does fit nicely with the franchise’s tone. Much like in the movies, you’ll encounter older relatives of the story’s main characters, from the McFlys to the Browns and of course the Tannens. What’s really cool is that the game pays a lot of fan service to its community, but it never feels pandering, and rarely seems to get into the lame “oh hey, you remember this” wink, wink, nudge nudge type of humor. Fans will really appreciate the small touches thrown in by the game’s writers, who are obviously fans. Those familiar with the series, and I mean really familiar with the series will want to play through the episode multiple times, or at least explore every option in each scene for little tidbits and references to the movies.

The only drawback to all this though is that this isn’t a very taxing experience, at least not when compared to Telltale’s previous works. This is unquestionably Telltale’s biggest profile game, and as such it’s clearly target for a much wider, much more casual audience. In other words, you won’t have to be Doctor Emmitt Brown to solve many of the game’s puzzles. It’s extremely possible to play through much, if not all of the game without using any of the in-game hints – perhaps it doesn’t help that several solutions are reused throughout the game.

Visually, Back to the Future sports a hyper realistic cartoon style that though makes some of the characters seem a bit off (Doc mostly at times), fits the world quite well.  The series always had a campy (please note, this is in no way a knock to the series) feel to it, and the animations and environments feel right here. Where the game really comes alive though is with the sound. Set against a familiar yet original take on Alan Silvestri’s original score, much of the voice actors put in impressive performances as their respective characters.  The gold standard is unquestionably Christopher Lloyd, who reprises his role as Doc and AJ LoCascio who sounds eerily like Michael J. Fox in his portrayal of Marty. I was a bit disappointed when I found that Tom Wilson didn’t reprise his role as bully Biff Tannen, but San Francisco based singer and beat-boxer Kid Beyond (real name Andrew Chaikin) does a worthwhile job portraying the character.

The Blast Factor: Back to the Future: About Time is only the start of the series, as there will be four more episodes released between now and March of next year, but it’s off to a good start. With a fantastic amount of fan service, and writing that serves as a love letter to a childhood favorite, Telltale’s Back to the Future game bucks the trend of terrible games based on cult favorite films. The whole series is only $25, more than worth 88 mph of fun and nostalgia.