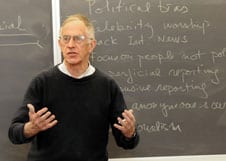 Northeastern University journalism professor Nick Daniloff, a former foreign correspondent for United Press International and U.S. News & World Report in London, Paris, Moscow and Washington D.C., has seen diplomacy in all its glory and ugliness. He was held prisoner by the Soviets as trade bait during the Cold War after a Russian spy was arrested in the US.

BLAST: Did you find something amazing, shocking or surprising about the cables?

NICK DANILOFF: In what I read, there were some surprises. For example: the King of Saudi Arabia urged the United States “to cut off the head of the snake” or, in other words, to destroy Iran’s nuclear weapons program. We always knew that Saudi Arabia feared Iran, but the suggestion to decapitate coming from the king’s mouth was a surprise. He does not talk like that in public.

I should add that the release of the military logs was shocking in that they revealed the names of some individuals who had been helping the U.S. in Afghanistan. That put those individuals in grave danger of execution by the Taliban. Since the uproar over this disclosure, Wikileaks chief Julian Assange has become a little more responsible and has agreed to remove names of persons who might be vulnerable to reprisals from the documents.

BLAST: Has Wikileaks done something illegal?

ND: First, Wikileaks is working with documents stolen from the United States. Stealing or receiving stolen material is illegal, isn’t it?

Assange has released documents which were classified “secret,” that is an illegal violation of the classification system. And if he has identified secret U.S. operatives that, too, would be considered illegal. The U.S. does not have an Official Secrets Act, rather it depends on the possessors of secrets to guard those secrets. When they release secret information they may be prosecuted. Journalists who disclose secrets in the U.S. are usually not prosecuted because it is not their responsibility to protect secrets and the First Amendment and its interpretations by the Supreme Court have given journalists considerable protection.

BLAST: How should ordinary citizens read and digest the Wikileaks disclosures?

ND: They should use the curiosity and critical thinking that we at Northeastern have tried to develop among our students. They should read the information just as they read the news only with the Wikileaks material they will have to supply context. And there is new information or news in Wikileaks. Eventually, readers may get bored reading hundreds, if not thousands, of cables. Then they will rely on good newspapers or TV broadcasts to point out important stuff.

Here’s an example which intrigues me personally as someone who lived in Moscow for many years but may not necessarily grab another reader. I thought Russian Prime Minister Vladimir Putin would never give up power. But some of the Wikileaks reports indicate he has grown weary of his responsibilities. That leads me to wonder if he will step down voluntarily.