Before I begin, I have a terrible confession to make.

I’ve never seen the original “Tron”. And believe me, I’ve tried. The 1982 Disney film about video game designers who get sucked into their own game is bizarrely hard to find. It’s not on Netflix, and the cheapest versions on Amazon were $160. You can’t find it at most video rental places- the one I tried had a copy, which was checked out. Disney, of course, is very finicky about when they release their canon, but I would have thought they would have flooded the market with the original in time for the release of “Tron: Legacy” this week.

Regardless, I was unable to procure it, and so have a gaping hole in my nerd repertoire. But research and some creative Youtube searching tells me that “Tron” was a film ahead of its time, a cheesy cyberpunk adventure flick, revered by nerds the world over. It retains its cult status through a mixture of nostalgia and “so bad it’s good” hipster ethos. I have a healthy respect and love for movies like this- the “Labyrinths” and “Fifth Elements” of the world have an important place in cinematic history too, after all.

“Legacy,” was ostensibly a good idea. To take the subject matter and jet it into the world of 3D televisions and XBox Kinect, to take the piece to the next level, and show The Grid in its panoramic, fully realized glory. “Legacy” gives rakish hero Kevin Flynn (Jeff Bridges) a son named Sam (Garrett Hedlund), and have him explore his father’s universe, fighting his father’s corrupt alter-ego Clu (a creepy, digitally-enhanced Bridges, along with a body-double) to rescue his father from digital exile. 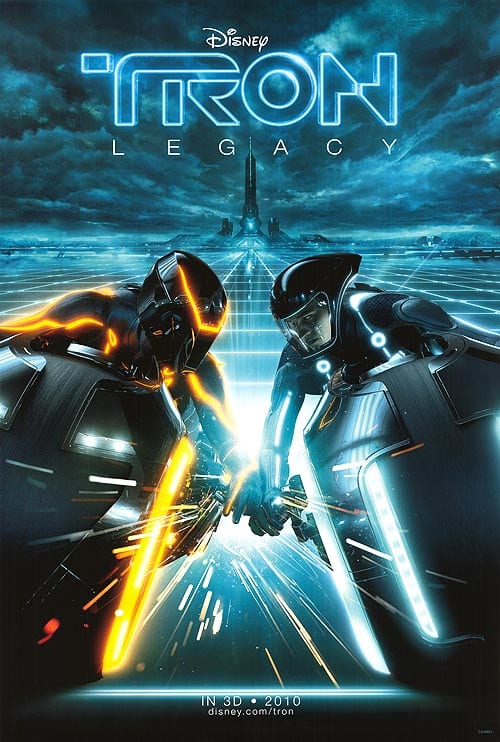 Indeed “Legacy” is very beautiful, with sweeping landscapes of neon and chrome. The design is reminiscent of “Blade Runner” but manages to exude a freshness that other Ridley Scott imitators have been unable to match. It’s unabashedly a fanboy movie- the women are like satin dolls, with 7-inch heels and eyelashes like sabres- but there’s real care taken with every visual I find almost craftsmanlike. Most of the film takes place in the “Tron” universe, but even the scenes in this world are gorgeous and meticulously produced. A particularly inspired scene has Flynn’s son enter his father’s old arcade, flip on the power, and stand back as the early 80s are reborn with the sounds of Pac-Man, Frogger and Journey on the jukebox.

But watching “Tron: Legacy” is like going out with a really good-looking, but very stupid date: it’s all good until they open their mouth. The dialogue, written between four authors, is embarrassingly clunky. An example. Flynn’s hot assistant (Olivia Wilde) asks Sam what a sunrise looks like. “It’s warm…bright…beautiful,” he responds lamely, which I thought was a joke until I realized it was supposed to be romantic. Bridges is basically playing The Digital Dude, literally telling Sam at one point “You’re really messing with my zen-thing, man”. There’s a certain amount of silliness I’m willing to put up with, especially where Bridges is concerned, but this is just lame.

Then there’s the 3D.

“Legacy” has a lot riding on its 3D capabilities. Unlike a lot of movies, which are shot in 2D and hastily converted in post-production, “Legacy” was shot for 3D. In the trailers it’s touting itself as the “movie 3D was made for”.

Whatever its merits, I have a feeling I’m unqualified to judge, because frankly I hate 3D. I hate it so very, very much. I hate the stupid glasses, which I have to put on over my real glasses. I hate that they get smudged. I hate that squinting through them more often than not triggers a migraine that renders me incapable of functional thought. I hate having blood, or flaming car parts, or someone’s enormous hand flung at me for no reason. Most of all I hate that 3D is meant to create a more immersive experience, but usually only serves to make me remember that I’m in a theater, watching a movie with huge, uncomfortable glasses on. So I hated the 3D in “Legacy”, though I concede it was better than the 3D in, say, “Clash of the Titans.”

I have a lot of love in my heart for big, silly, fun action movies- movies hat make things go boom and don’t take life too seriously. God knows I’ll get my fill of pretentious Oscar-bait over the next few months, and I’m happy to sit back with my popcorn and have the CGI think for me. But, just like when you go out with the hot but dumb guy, there’s only so much a girl can take before she needs to rethink her priorities.