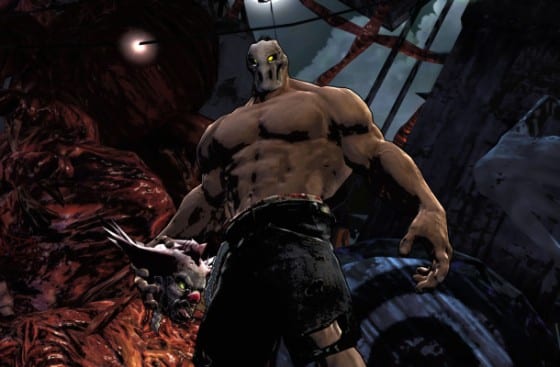 Just in time for the holidays, Namco Bandai Games brings us a heartwarming tale of one man and his quest to be

reunited with the woman he loves. It’s a tale of love, determination…Oh, and blood – buckets upon buckets of blood.

There’s a lot wrong with the re-imagining of the classic game Splatterhouse – it’s shallow, and it features weak combat,  and a slew of embarrassing technical flaws but hey – you can use your own severed limbs as weapons, so it’s got that going for it. Splatterhouse may be enjoyable for a few moments, but when the novelty and nostalgia wears off, you’re not likely to go back to it much after.

The 2010 version of Splatterhouse loosely follows the plot of its 1988 predecessor, but takes several creative liberties in the process. In both you’ll play as Rick in search of your girlfriend Jennifer who has been kidnapped. In the original, the plot begins when the two take shelter in an old mansion, here she’s summoned to the Dr. West, who practices necrobiology (sure, whatever). Long story short, Jennifer is kidnapped and you’re mortally wounded. When you awake, you find that you knocked over a sarcophagus and have awakened and ancient and magical mask – with a potty mouth. Together, Rick and the mask must brutally maim the nightmare creatures of the mansion in an effort to save Jennifer. It’s kind of like 48 hours, but here Eddie Murphy is a demonic mask.

For what it’s worth, Splatterhouse seems to know what it is, and plays its tongue-in-cheek card decidedly well.  It never takes itself too seriously amidst the blood and gore. The story is told in almost a pulp-comic sort of way. Yes, it knows it and the content it’s bringing is silly and the game handles it well. Truth be told, there are a few interesting story turns to be found buried within Splatterhouse, but none of them are anything you wouldn’t.

You’ve already played Splatterhouse, even if you’ve never touched the game. It’s the same as every other depth lacking beat-em-up you’ve ever played. Walk into a room, maim some killer clowns, demons and other atrocities, rinse and repeat. As you progress, you’ll rip off limbs, decapitate and splash the blood of your enemies on your screen, they’re pretty cool the first few times, but get old fast. Some of the splatter-kills (the game’s idea of really violent attacks) will make you giggle with gory glee, but those two will be repeated on an almost laughable scale. Combat is mostly of the button mashing fare, and you’ll be able to upgrade your moves or purchase new ones with the blood you spill (yes, Splatterhouse uses Blood as currency).

The controls of Splatterhouse too are disappointing. The game features loads of classic horror weapons from chainsaws to machetes, but getting to use them is a complete pain in the ass. It should be easy, walk over to it and push a button, but it’s just not that simple. All too often, the game won’t recognize that you’re trying to pick up the object and you’ll be left grasping at air when you know that the item you want it right there. It’s made all the more frustrating by the fact that when you’re trying to do this – there’s always  a ton of bad guys ready to dish out damage to you. The controls are made all the more worse during the game’s disappointing and out of place platforming sections.

The Blast Factor: Horror diehards may find a bit of enjoyment in the love letter Splatterhouse writes to their genre, but after while it’s pretty obvious that it’s a rather thin experience. All of the blood in the world couldn’t hide this game’s embarrassingly technical flaws, broken mechanics and inconsistent gameplay. If you’re a fan of the original, or off the wall violence, you may like Splatterhouse, but everyone else should stay far away.