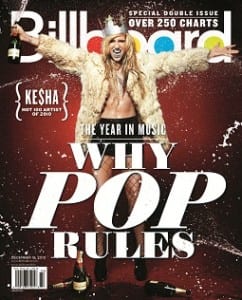 She told the magazine, “I pretty much feel like I’ve been reborn into this completely different existence. My entire life has become making music and playing shows, and I love it.”

Her first single “Tik Tok” was played on radio all over again earlier this year (this is why we all know the song very well) and spent nine weeks atop the Hot 100 list.

Lady Gaga was named Billboard’s Artist of the Year award for 2010.