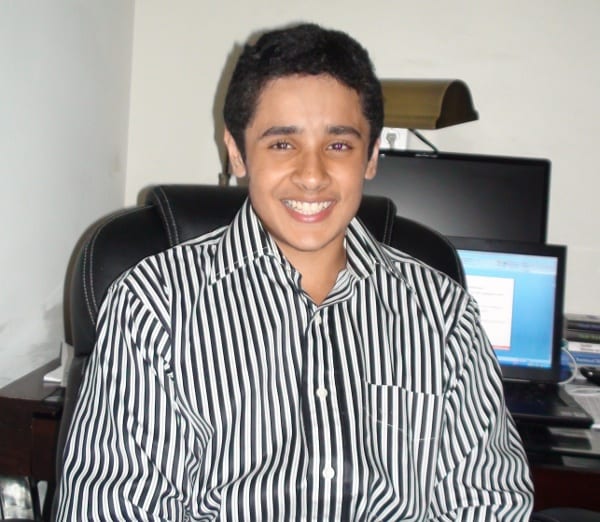 LEXINGTON — At 3 a.m., his alarm clock went off, and Avdeep Sahi, 16, slowly rose from bed, his legs and body aching from the previous day’s football practice. While the rest of Lexington was asleep, Avdeep was getting ready to call India and get to work.

After shaking away his early morning drowsiness, Avdeep, in his ever-gregarious tone, called developers in India to troubleshoot some problems he was having as he worked towards completing the challenging project he undertook at the beginning of the summer: developing an iPhone application from scratch.

In addition to being an entrepreneur, Avdeep is an active and vibrant member of the Lexington High School community. Even though his family moved to the United States from India just four years ago, in 2006, he has adjusted quickly to his surroundings, even introducing his American friends to Indian culture by starting a cricket club in school. As if his numerous endeavors are not enough, he is also a student teacher in a computer programming class.

“He has proven to be a natural leader who is hardworking and active,” Avdeep’s father, Avinder, said.

The iPhone application project originated this past spring when Avdeep was deciding where he wanted to intern for school credit between his sophomore and junior years in high school. Due in large part to his love of Mac computers, he chose to work at Lexington Community Media Center (LexMedia), which has a substantial and well equipped Mac lab for digital editing.

LexMedia covers local events in Lexington, and Avdeep’s main responsibility was to record and edit some of the content that would be broadcast. While interning, he had an idea for how he could help LexMedia take advantage of the fact that people are spending more time on their Smartphones and less time on their computers.

“For about a year I had started teaching myself the basics of how to program applications by viewing videos online and reading magazines,” Avdeep said. “I then proposed that if they let me use their resources, I would attempt to create an iPhone application that would make all of their content available for users, streamlined to their Smartphones.”

When Avdeep offered to volunteer his time to produce the iPhone application, LexMedia said they would be happy to let him attempt to do it. However, there were some questions as to whether or not he could complete such a complex project.

“Avdeep told them that he would have to get connected with the process, the resources, the training, and he would try to make the application, but was not sure if he would be able to do it,” Avinder said.

“Before the summer I didn’t even truly know how to program,” Avdeep added.

Despite his uncertainty, Avdeep dove in head first and dedicated nearly all of his free time to developing the application. However, he soon found that the labyrinthine project was impossible to complete without the help of others. Luckily, he knew a couple of companies that specialize in iPhone development, one of which is a company in Cambridge called Endeca. On Fridays, Avdeep would commute to Cambridge and pick the brains of the professionals at Endeca.

In addition to calling developers in India from home, Avdeep spent many nights in the lab at LexMedia. He also sought the help of individuals at CMC Americas, another application development company. Near the end of the process Avdeep ran into a problem with PC hardware and started using his high school’s Mac lab. His teachers took an interest in his project and helped Avdeep troubleshoot while uploading the content.

“All of the people were truly gracious with their resources and time,” Avdeep said. “They were really nice to me.”

Avinder believes that the country’s recent economic struggles had a lot to do with why people were so willing to lend a helping hand to his son. Avdeep’s mentors and teachers saw a bright future in him and wanted to give a young man a chance in a tough economic climate.

“Ever since the downturn we have become pessimistic about what is around us, but there are pockets of people who are an open source,” Avinder said. “People are available with their time, knowledge, resources, and are raising their availability to high school kids,” he said.

In September, after three months of working tirelessly, Avdeep finished the application. He submitted the content to Apple for them to review. During the review process, the Sahis realized how lucky Avdeep was, as he was exposed to talented professionals who provided him with guidance and let him use their resources for free.

“People are putting their faith in a much younger generation today,” Avinder said.

In early October, Avdeep was informed that the LexMedia iPhone application had been approved, and at the age of 16 he had its copyrights. The finished product, available through iTunes and App Store, provides updates from LexMedia’s portal, Facebook page and videos, as well as access to Lexington news and events schedules. Avdeep is currently working on new features for the application’s updates, including a live feed option.

The process, from start to finish, cost a few hundred dollars and proves that sometimes the only capital you need is drive. This is a young man who saw an opportunity and did not simply dream — he made his dream happen.

“All you need is motivation,” Avdeep said.

Below are screen shots from Avdeep’s LexMedia iPhone application, courtesy of Avdeep and Apple: