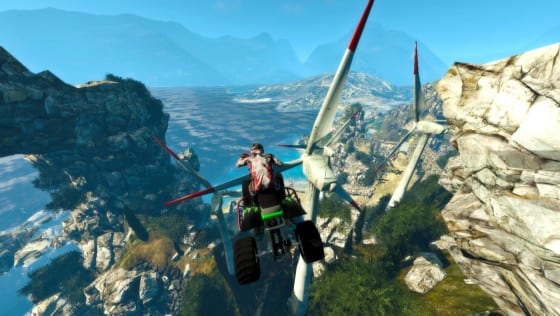 Southpeak Games’ new off road racer Nail’d is a definite  product of the times. Take one part ATV VS MX, add in a

heaping helping of tongue-in-cheek humor and a ton of Red Bull for good measure. Recreating an incredible sense of speed superbly, Nail’d is a to the point, full throttle, little innovation arcade racer, but it’s also damn fun. It may not be the deepest, most complex racer on the market, but you can’t help but smile as you freefall off cliffs or dodge trains. Nail’d is the perfect game to kick back and share a Saturday afternoon with your buddies with.

Nail’d is an arcade racer – plain and simple, and the developers over at Techland (most well known for the Call of Juarez series) aren’t afraid to show it. While other games have you swapping out parts and modifications, Nail’d has one goal – to create an amazingly fun racer with a blistering sense of speed. You’ll be going off ramps, dodging obstacles from speeding trains to rock walls and even hot air balloons. The trick, and what makes Nail’d so damn different than the other games like it is that the developers have included the option to steer your ATV in mid-air. While it may sound like a small addition to an already established formula, it adds a ton of cool moments to the game that are sure to keep you on the edge of your seat. Imagine launching yourself off of a giant ramp, as you hit the peak you notice that you’re headed right into the side of an unforgiving rock wall and you frantically attempt to steer your way to the ledge on your left.  What you do in these next few seconds could be the difference between placing first or last. This in essence is the Nail’d experience.

Complementing the frantic action quite nicely is the game’s fantastic track design. Most races start off with your typical straight away, but rest assured, it’s only to build up speed. Before you know it, you’ll be banking off intricate twists and turns and launching into gorgeous set pieces. Though you’re

Going to be whizzing past them incredibly fast, you’ll be missing a major part of the game if you don’t take a brief second (even if it’s just the pre-race movies) to admire the incredible level of detail in the environments. The same detail isn’t carried over to the entire game, as some of the player models and animations can come off a bit lacking, but you won’t see them much because the game is moving so fast.

Nail’d  is a game of decisions both big and small. Many of the tracks feature multiple pathways you can take. Do you pull up to try to get more air and tae the higher path or should you dive down to avoid getting smacked and cut to pieces by a wind turbine (no, really)? Either way proves to lead to an exciting outcome, but you can’t always judge the situation easily thanks to an unreliable camera.  All too often you’re looking like you’re going to make a jump, only to meet a fiery crash at the edge. Another issue with the camera is the game’s  camera is that it randomly seems to darken the screen. This happens more often than not in tunneled in areas, and leads to you crashing on unseen obstacles, meaning you’re bound to do it again because you can’t see exactly what caused it.

As mentioned above, Techland does a great job making Nail’d a fast and fun racer, but it doesn’t do much for the overall depth of the game. You have career mode, which of course tasks you with coming in first or restarting races, along with  time attacks and stunt modes. The odd thing about the game’s stunt modes is that there’s not really a stunt trick system in place, and in truth – you can’t really do much other than pop wheelies and land on other racers.  The day one DLC included with each new copy of the game puts a bomb and racers ATVs and tasks you with having to boost at the right time to defuse it is good fun and a decidedly different way to play Nail’d.

The Blast Factor: Nail’d would be right at home in the arcade scene of yesterday, what it lacks in innovation and depth it makes up for in blissful speed and unabashed fun. Best played with others (you’ve got to trash talk you know), Techland’s dirty racer is an unexpected favorite of the year. Go out and get Nail’d, you won’t regret it.