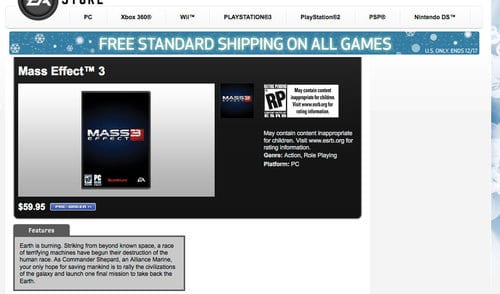 One of the big rumors about tomorrow night’s Spike TV Video Game Awards is that we’re going to get confirmation of Mass Effect 3. First, Sony’s Russian office confirmed the rumor over Twitter, then took it down, now it seems that EA proper is eager to spill the beans.

The picture to the right was spotted by Destructoid earlier this morning over at EA’s online store. The listing has since been taken down, but they were lucky enough to snag the shot before.

The features spot on the page also seems to give us the first details of the game’s plot. It reads: ” Earth is burning. Striking from beyond known space, a race of terrifying machines have begun their destruction of the human race. As Commander Shepard, an Alliance Marine, your only hope for saving mankind is to rally the civilizations of the galaxy and launch one final mission to take back the Earth.”

So, Mass Effect 3 returns to Earth? What do you guys think?