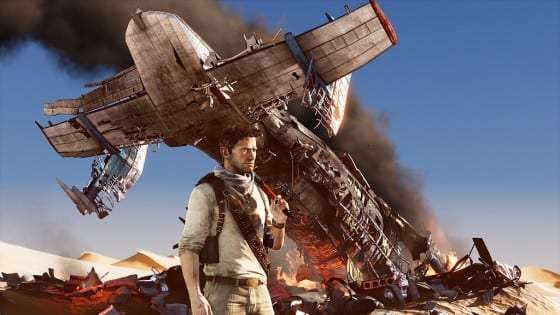 We’ve been hearing rumors about Uncharted 3 for quite some time now, but this morning, Entertainment Weekly broke the news — the game is real and it looks awesome.

As rumored, Uncharted 3: Drake’s Deceit takes place in the Arabian Peninsula and the vast wasteland of the Rub’ al Khali Desert and has Drake looking for a legendary lost city. According to the reveal, the game focuses highly on the theme of deceit and explores the relationship between Drake and father figure and mentor Sullivan (note — not his fortune seeking family.)

Though concrete details and release info is yet to be revealed, it’s expected to see release at the end of the year. Hungry for more Uncharted 3 details? Check out the first teaser, and screens below and be sure to catch the Spike TV Video Game Awards when it airs this Saturday for the first trailer. Want real gameplay? Tune in to Late Night with Jimmy Fallon Monday Night to see the Naughty Dog Team debut the game.