Editor’s Note: Each week in December we’ll be unveiling another nominee for Blast’s 2010 Game of the Year Award, here’s our second—Nintendo’s Donkey Kong Country Returns. Check out last week’s nominee Red Dead Redemption. Keep checking back each week until the final week, when we reveal the winner along with all of the yearly award winners. 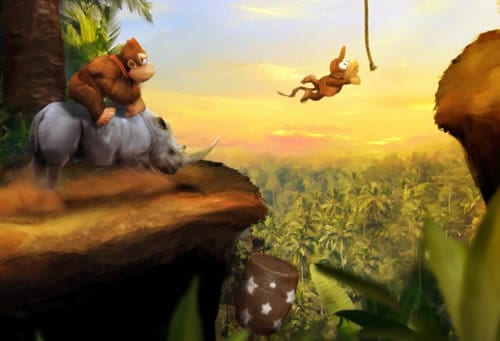 In recent Donkey Kong has been reduced to a bit player to Mario’s starring roles. It was becoming obvious that the big Ape was in need of a reinvention. Or was it?

Strangely enough, Retro studios didn’t look to new technology or fancy new features  for their attempt to restore faith in the once prominent franchise, they merely returned one of Nintendo’s oldest heroes to his roots and in the process have surpassed everything Rare has done with the original.

In essence, returns is the formula from the original Donkey Kong Country boiled down to its most simple assets. Anyone who remembers the last few games in the series will remember that they were filled with increasingly annoying King family members and stale gameplay. Save for our ape protagonist and Diddy (along with a few appearances by Cranky Kong), the extended family sits this one out in favor of a more streamlined story and classic gameplay.  Everything you remember is here, from the vine swinging, to collecting the gold K-O-N-G letters, the key here is that Retro Studios, the same team that revitalized the Metroid series with Metroid: Prime was able to make the gameplay feel fresh, without adding too much.

What’s most striking about Donkey Kong Returns is just how impressive and creatively brilliant the level design is throughout the entire experience. From striking set pieces like riding on the back of a whale to the series trademark mine car sections, every second of Kong’s latest adventure seems lovingly crafted to get the absolute most entertaining experience. Sprinkled throughout are clever nods to the original series, like characters and hidden rooms. It’s clear that Retro were fans of the original game.

That level design though isn’t just for show though, it also adds a world of difficulty. While it may not look as menacing as it is, there are sections of Returns that are unforgivingly hard. Much like the original, you’re going to gain a lot of lives, which will lure you into a false sense of security, but you’re likely to use them all during these punishing sections. More often than not, these sections will either be the boss fights or include them. Strangely enough though, the game feels instantly accessible and inviting even for those without an emotional attachment to the big monkey on the cover. Also aiding in helping frustrated players is the Super Guide. Much like in New Super Mario Bros, dyeing eight straight times leads to the option to see a prerecorded run through of the level.

For the first time in the series, Donkey Kong Country Returns includes co-op simultaneous gameplay, and while at times it can be a bit frustrating in the same way the multiplayer of New Super Mario Bros was, it mostly works. As you’d expect, Donkey Kong is more of a brute type character who uses mostly melee combat, while Diddy is quicker and uses projectile weapons. Undoubtedly, my favorite part of the co-op experience was the ability to have Diddy jump on Donkey Kong’s back, so it’s easier for less skilled players to advance while playing with a stronger partner.

With Donkey Kong Country Returns, Retro Studios proves that its talents aren’t just limited to first person shooters. The newest Donkey Kong adventure is a breathtakingly creative and fun instant classic that everyone will be able to appreciate. Whether you hold an emotional attachment to Nintendo’s monkey hero, or your experiencing the franchise for the first time, Donkey Kong Country Returns is one of the best games you’ll play all year.