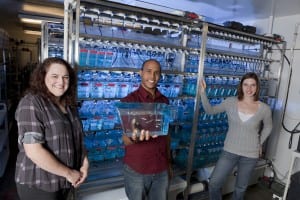 A gene that can cause congenital heart defects has been identified by a team of scientists, including a group from Princeton University. Authors on the paper included, from left, Rebecca Burdine, a Princeton molecular biology professor, and graduate students Jason McSheene and Kari Baker Lenhart. The team made the discovery by studying the embryos of zebrafish. Princeton University (Brian Wilson/Priceton University)

Researchers at Princeton University have found a gene that can cause congenital heart defects, a discovery that could one day lead to new treatments for those who may otherwise die suddenly.

Princeton researchers focused on identifying and studying the gene in zebrafish embryos, and the team’s work expanded to include collaborations with other groups studying the genetics of mice and people.

“This work really showcases the use of collaborative science and multiple model systems to better understand human disease,” said Rebecca Burdine, an assistant professor of molecular biology at Princeton who led her team.

The newly discovered gene, called CCDC40 (for “coiled coil domain containing protein 40”), controls right-to-left patterning as tissues develop, a critical factor in the configuration and effectiveness of organs. Scientists found the gene by zeroing in on zebrafish and mice in which the placement, and sometimes the internal structure, of organs is disrupted or reversed. While these so-called “left-right patterning” defects occur very rarely in zebrafish and mice, they occur at high frequency in the animals with mutated CCDC40 genes. Their study was published online in Nature Genetics on Dec. 5. A separate paper by another group identifying a sister gene, CCDC39, based on studies of genes in sheepdogs, appears in the same edition of the science journal.

“We used the strengths of different model organisms to gain an understanding of how a novel protein, produced by this new gene, functions,” said Irene Zohn, who led a research group studying mice genetics at the Children’s National Medical Center in Washington, D.C., and is one of the first authors on the CCDC40 study with Burdine’s group. A third group, led by physician Heymut Omran and based at University Hospital in Freiburg, Germany, rounded out the team, with other individual participants located elsewhere. “These findings would not have been possible without the collaborations between the three groups,” Zohn added.

The collaboration started several years ago when Zohn contacted Burdine, a renowned expert in the study of left-right patterning in animals. Developmental biologists such as Burdine investigate what factors contribute to patterns in vertebrates relating to symmetry and leading to where organs are placed in the spatial configuration of the body. In humans and many animals, for example, the heart is usually situated on the left side with the liver at its lower right. Flaws in left-right patterning can lead to congenital heart defects in humans.

It is estimated that one in 10,000 people have a condition known as situs inversus, when the left-to-right patterning in the body is switched. In most cases, there are no adverse consequences of this condition, but problems arise when perturbations in the patterning signals produce reversals within organs, including heart structures such as the aorta and pulmonary artery. In rare circumstances, the heart can be located on one side without any supporting structures around it such as arteries and veins. That condition can be fatal.