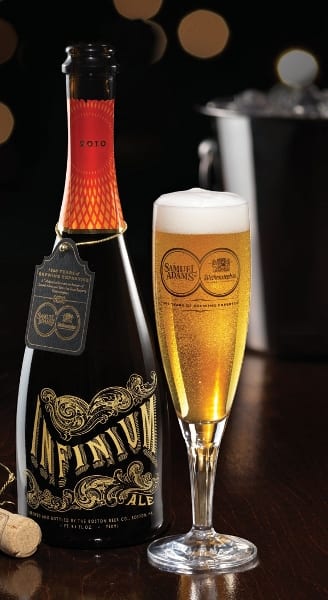 Bostonians and beer enthusiasts alike already know that Samuel Adams beer is delicious, but it doesn’t hurt that the beer masters at the world’s oldest brewery think so, too. In early December, Infinium ale, the product of a two-year partnership between Germany’s Weihenstephan Brewery and the makers of Samuel Adams, Boston Beer Co., will be available for sale in the United States.

Jim Koch, the founder of Boston Beer Co., told the “Boston Globe” that Infinium’s taste is “sort of in between a champagne, a dessert wine, and maybe a Sam Adams Noble Pils.” He added, “You get some of the body and mouthfeel of a beer, some of the hop character of a beer, but it’s very dry and acidic without being thin.”

The ale is golden and bubbly and has notes of pear, apple, peach, and apricot, but don’t be fooled by the fruit or the fancy bottle — Infinium contains 10.3 percent alcohol, which is more than twice as much as the typical American beer.

So you can forget Miller High Life, as Infinium just might take its place as the “champagne of beers,” and it could just as easily take the place of your glass of bubbly on New Year’s Eve. But you’d better start hoarding cases the moment it hits shelves this December, because Jim Koch told the “Boston Globe” that he expects liquor stores to be sold out of Infinium by New Year’s Day. Cheers!