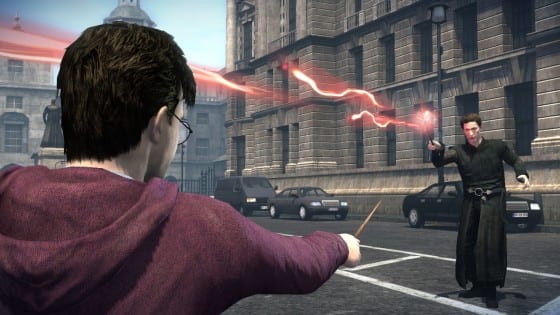 Perhaps more than any other intellectual property, the Harry Potter series has defined this generation. Whether you’re a fan or not, there’s no denying that the works of J.K Rowling have had a lasting effect on the culture and personality of this country much like that of the original Star Wars trilogy over thirty years ago.

It’s a bit insulting then when things like this happen. Not only is the video game adaptation of Harry Potter and the Deathly Hallows: Part 1 the uninspired, licensed dribble you expected – it’s a downright terrible experience. From game crippling bugs and laughable mechanics, to some of the most annoying sound bites you’ve played in quite some time, Harry Potter and the Deathly Hallows: Part 1 is what’s wrong with the video game industry.

The reason the Harry Potter franchise works so well is because at its heart, it’s the coming of age story of three kids as they confront life, death, love and even their own mortality under the veil of the story of a wizard. The video game? Not so much. If there were to be a message here, it would have to be that if you’re annoying enough, all of your problems are sure to run away. The game features literally none of the heart, emotion or fanfare that has made the series so popular in the first place.

Following the book and movie very, very loosely, the first chapter of the final tale of Hogwarts finds Harry, Ron and Hermione tasked with getting rid of the evil Lord Voldemort, but to do this, they’re first going to have to destroy the rest of the horcruxes, or objects imprinted with the evil spirit of Voldermort. What exactly does that mean for you? A whole lot of nothing since the game does pretty much nothing in an effort to move the plot forward in favor of cheap sequence after cheap sequence.

So just how does Deathly Hallows play? It’s easiest to think of it as adventure game, mixed with the cover system of Gears of War – just really a really terrible one. Much like everything else here, the cover system is downright terrible, and you’ll often find yourself sticking to the wrong side of your proposed cover, or not at all. As fun as casting a ton of spells on hundreds of Death Eaters seems like it should be, it grows old after about the fourth or fifth second, as Harry’s constant yells of “STUPEFY….SPTUPEFY…” are yelled every few seconds. It’s made worse by the fact that pretty much every spell you do is a variation of said attack.

Hint, this guys bad -- but still not as bad as this game.

There’s a stealth element to Deathly Hallows, via the Invisibility Cloak. Again – a great idea in theory, but it fails miserably in practice. First, you’ll occasionally run into a bug that sends Harry to the left or right by about ten feet to the left or right, which really makes it hard to accomplish the whole sneaking through without touching anyone thing. Oh, and you have to stand still to charge it – what fun. The strangest part about the invisibility cloak is the fact that it never seems to play by a single set of rules. There are literally entire sections of the game, including the final boss battle that can be passed if you just stand in the right place at the right time.

On the Xbox 360 version of the game, there’s a bit of Kinect support, but it too is thoroughly disappointing. When we first got the game in, I thought it would be a good demonstration of what the new peripheral could do in combination with a new controller. It is not. The Kinect suite of the game is a mini game acting completely independent from the main content on the disc. Acting as an on rails shooter you’ll flick your wrist to cast spells on a series of enemies. All too quickly though you’ll realize that you’re not really aiming at anything, and the feature seems even thinner. Kinect could have been a huge part of Harry: Potter and the Deathly Hallows, but much like everything else in the game, that potential is wasted.

The game’s biggest crime? The fact that EA expects you to shell out $49.99 for this game, and then again when the second game comes out. Movies can do this, as a ticket to each half will run you $10 tops, but to ask consumers to pay $100 for one single experience is just plain ludacris.

The Blast Factor: The videogame adaptation of Harry Potter and the Deathly Hallows: Part 1 fails in almost every way imaginable. It’s not fun to play, it’s buggy and worst of all, it’s full price for half of an adventure. Harry Potter fan? You’ll be disappointed. Looking for a late way into the series, check out the books or movies instead, just avoid this game at all costs.

Harry Potter and the Deathly Hallows (part 1) was developed and published by EA and  released for the PC, PS3, Wii, and Xbox 360, November 16, 2010. A copy of the game was provided to Blast by the publisher.